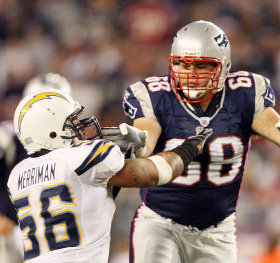 Nothing like leaving the table at my 95 year old Grandma's birthday dinner to do some blogging..

The Kansas City Chiefs have claimed T Ryan O'Callaghan off of waivers according to Mike Reiss of the Boston Globe.

O'Callaghan was recently released by the New England Patriots, former home of Chiefs GM Scott Pioli, which led many, like Mr. Reiss, to speculate that the Chiefs would put a claim in on him.

O'Callaghan has appeared in 26 games since being a fifth round draft pick of Pioli and Patriots head coach Bill Belichick in 2006.

He started six games his rookie season and one in 2007 when starter Nick Kaczur was injured.

He injured his shoulder on August 28th last year and was placed on injured reserve causing him to miss the entire '08 campaign.