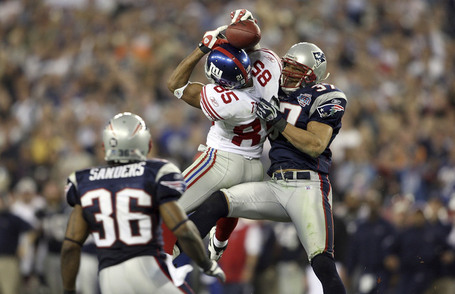 The Kansas City Chiefs have inquired about recently released wide receiver David Tyree according to Ralph Vacciano of the NY Daily News.  Tyree, of course, made the catch in the New York Giants 2007 Super Bowl run.

(If you don't know what the catch is...you should since there's an entire Wiki page dedicated to it.)

The Chiefs have called Tyree's agent, Mark Clouser, to inquire about the former Giant.  The Baltimore Ravens have also expressed a "serious interest" in Tyree according to Aaron Wilson of the Carroll County Times.

Tyree was a sixth round draft pick in the 2003 draft.  He was actually voted to the Pro Bowl in 2005 as a special teams player.

My best guess as to why the Chiefs inquired about Tyree is special teams play.  His career high for receptions is 19 and for yards is 211.  Hardly impressive but, with a wide receiver corps the head coach isn't particularly proud of, he could add some depth.

The biggest (and perhaps only?) reason fans outside of New York have heard of Tyree is because of the catch.  The following preseason, he injured his knee and missed the entire 2008 campaign after being placed on injured reserve.

This wouldn't be the first former Giants wide receiver the Chiefs have expressed an interest in.  Amani Toomer was with the team for three weeks during training camp.

Thank @thecycle for bringing it to our attention by following him.