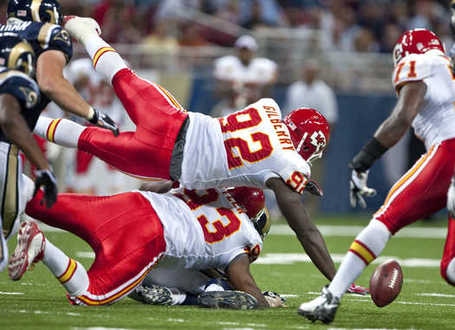 In a little less than 28 hours the Kansas City Chiefs will release 22 players to get down to the league mandated 53 man roster limit.

That's about 30% of the team.  It's a starting offense and a starting defense.

For many of the players, it's the last time they'll wear an NFL uniform.  For others, it's a break until the next NFL team comes calling when someone else is injured and a stopgap is needed.

With a little over 24 hours to go, I have plenty of questions about the cuts.  Here are a few thoughts on the cuts tomorrow that have been bumbling around in my allergy infested head.

Right side of the offensive line

No one is getting it done here.  I think Andy Alleman and Ikechuku Ndukwe are safe because they were acquired via trade just a couple weeks ago.

Damion McIntosh or Barry Richardson could be getting a pink slip.  Mike Goff or Wade Smith can't feel completely comfortable.

This is, in my mind, the most unpredictable section of cuts out there.  The players we thought were solid (Goff) could be cut and the players who knew what they offered us (McIntosh) could stay.

(For the record, I'm pretty excited about Studebaker and think he makes the team.)

There could be a shocker in there, too.  And it could be Derrick Johnson.  Last week, Haley said DJ has to "get it goin' a little bit", which to me, might indicate he's not as safe as we all previously thought.  It's probably not likely but we can't treat him differently just because he was a first round pick.

Our safeties are almost completely set in my mind.  Jarrad Page and Bernard Pollard will man the starting spots while Jon McGraw will backup Page.

But, as we've talked before, one of the more interesting battles on this team comes to the backup safety position.  Mike Brown v. DaJuan Morgan.

I've already detailed my thoughts on this.  I previously said Brown will win the job and, just because I'm stubborn, I'll stick with that.

Biggest surprise: Whoever is cut between Brown and Morgan.