Share All sharing options for: These Kansas City Chiefs Helped Themselves Last Night 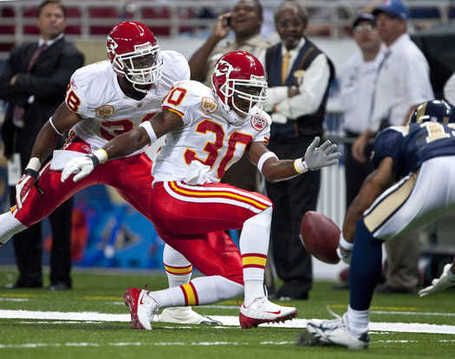 The Kansas City Chiefs lost the Governor's Cup to the poor man's version of Kansas City St. Louis Rams last night 17-9.  The Chiefs, led by Matt Gutierrez, had a chance to tie the game late but instead chose to preserve their unperfect record.

There were positives, however, ranging from players that are on the roster bubble to the most established veterans.

Of course he had a big game.  Just yesterday I said Mike Brown would win the battle for the backup safety job.  I cited Brown's leadership qualities and Morgan's history of injury as reasons for the pick.

Then the second year safety goes out and makes eight tackles and a diving interception.  He saw plenty of playing time, which to me means that the coaching staff wanted to give him a good chance to win a spot on the team.

He may have done just that last night.

How many times have we said versatility is a good thing with the new Chiefs regime?  A lot.

Jackie Battle demonstrated just that last night.  Eight rushes for 28 yards is so, so but good enough to spell the starters.  What was nice was the four receptions for 63 yards.  Yeah, most of it was at the end of the game when the Rams were playing a quasi-prevent defense but he still got in the open field and got out of bounds when necessary.

Last week was just a hiccup for Succop.  Last night was, in my opinion, a sign of things to come.

Three attempts, nine points, and a long of 40 yards.  His kickoffs consistently made it to the end zone.

There's not much else to say. I think we've found our kicker.

An odd pick, no?  There were two things I liked from Mr. Crabtree, a UDFA, last night.

First, a 17 yard reception.  He caught the ball on the right side of the field and, right as he turned up field, was met by a defender.  There's no doubt Crabtree won that collision.

Then, with time running out in the fourth quarter, Matt Gutierrez threw a prayer to Crabtree as he crossed the middle of the field.  It was a mistake on the quarterback's part as Crabtree didn't have a chance to catch the ball.  In fact, the defender had a better chance to catch it, which he would have if Crabtree didn't make a great play on the ball to knock down the interception.

I don't think he'll make the team, because at tight end it's becoming a number game with Ryan, Cottam and O'Connell in front of him, but that was a heads up play by a rookie.