Share All sharing options for: Receivers, Safeties on the Chiefs Roster Bubble 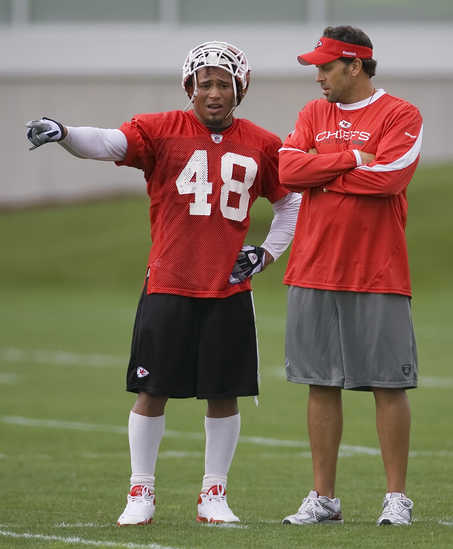 There are roster battles across the board for the Kansas City Chiefs bubble players but I've highlighted two of the particularly interesting battles today.

First, is DaJuan Morgan and Mike Brown battling it out to backup Bernard Pollard.  There are reasons for and against each player.  I make the case that Brown will be retained by the coaching staff.

Second, is the slew of reserve wide receivers on this team.  From Copper to Wright to Johnson to Lelie, there are no sure things.  I don't make a case for any of these players, instead raise questions about each of them.

Neither have made a huge impact on the field this season but, for leadership purposes, I see Mike Brown winning the backup safety battle.  Bernard Pollard should be the starter, in my estimation, despite what might be going around.

Some rumors surfaced within the last couple of weeks that Morgan was the subject of a failed trade between the Chiefs and Lions.  We're not sure of the accuracy of the rumor but it was definitely out there.  If it is indeed true, then it's clear the Chiefs A) don't need him, B) don't want him or C) have someone else on the roster (Brown) they prefer.

Whatever the choice, the result is the same.

This is what tells me Brown will stick around: The Chiefs worked him out on June 3rd.  23 days and a full slate of OTAs later, they signed him.  That means that they wanted to see what he had left in the tank, saw the competition already on the roster and went ahead and signed him.  To me that says they believe he's a good fit with the Chiefs.

Both have been pinned as injury prone but, thus far in Chiefs camp, it's been Brown, not Morgan, who has stayed healthy.

Both players are due minimum contracts with Morgan signed through '10 and Brown just this year.

I think most of us can agree that Dwayne Bowe and Mark Bradley are making the team.  Are there any arguments on this one?

I feel pretty safe saying that Bobby Engram will make the team even if he hasn't had much action in preseason.  He's been in the league for 13 years so, assuming health, the Chiefs know what they've got with him meaning the preseason action isn't necessary.

I also feel safe about Quinten Lawrence who has been targeted more than any other wide receiver this preseason, which means he gets open (or the quarterbacks think he's open) and that's gotta be something the coaching staff recognizes.  Two more pluses: He has been getting some time at returner and might be the fastest player on the team.

At this point, it's down to a numbers game. For these four, I have some questions.

Copper has been with the first team, which shows he's on Haley's good side when it comes to showing effort (because that's how his depth chart is created...based on effort). But, will Haley keep someone on the team based on effort and not necessarily results in the preseason?

Lelie showed up late so he's a little behind.  He's shown a little bit, especially last game and especially considering he was just signed a couple weeks ago.  Does Haley keep Lelie based on what he could learn in this offense and what he could contribute?

Johnson appears to be out of the running if we base this off of what we've read in practice reports.  To be honest, the only reason I remember Johnson's name is because he was the recipient of a Haley lashing in a recent NFL Network video.  But the Chiefs did work him out prior to the draft, and signed him as a UDFA so there's something there that they like, or thought they liked.  Does Haley give Johnson some more time to figure out if he likes what he thought he liked?

Wright is an interesting figure on the team.  In the early goings his name was splattered across nearly every camp report out there.  Christy Brusoe, a UWRF writer who covered the Chiefs, boldly claimed there's a spot on this team for Wright based on effort alone.  We'll see.  Does Haley keep a guy like Wright who appears to be competent at most things, yet not exceptional at anything?