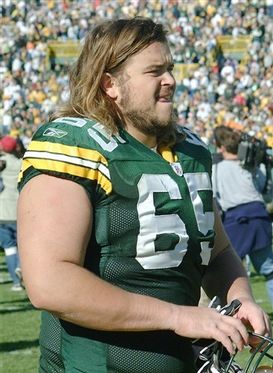 And the news continues to roll in for the Kansas City Chiefs.  Pro Football Talk reports that the Chiefs tried out former Green Bay Packers tackle Mark Tauscher.

Tauscher has played right tackle since the Packers made him a seventh round pick in the 2000 NFL Draft.  He's been fairly durable throughout his career but injuries have cropped up in recent years which have caused him to miss eight games over the last three seasons.

He's coming off of ACL surgery which is why teams have shied away from him thus far.

Tauscher definitely seems to be a viable option for the Chiefs at this point who have been trying to solve the problem at right tackle.  I can start to connect some dots, though it doesn't necessarily mean much.

It's likely the Chiefs are interested in his services but are getting a better feel for where he stands following offseason surgery.  Packers head coach Mike McCarthy said as recently as July 30th that he wouldn't rule out bringing Tauscher back but there's been no interest expressed publicly since then.

We're not sure if it's going to be Tauscher but I don't expect the team to be carrying four tight ends for very long.