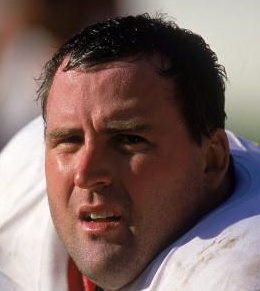 Last week, an eleven year veteran of the Kansas City Chiefs organization expressed his disappointment with the way former players are treated with the new regime.

Tim Grunhard ('90-'00) talked with the folks from 810 WHB.  The full interview can be heard here.  I've taken a few excerpts below (courtesy of these folks).

In short, Grunhard feels he is being forced out by the new regime in Kansas City.

"They don’t even want us to be seen out there (at Arrowhead). I’ve talked to some of the older (ex-Chiefs’ players) who are around a lot and they’re basically aced out also."  Grunhard cites other teams, like the Packers with Frank Winters and the Broncos with Neil Smith, as those that treat former players "like gold."

He said everything, even the security, has changed.

"I talked with some of the people in the (Chiefs’) organization – the marketing people have never been to the football side, and they’re not really allowed to go over there. I mean there’s a lock and key, there are passwords, there’s security after security. There’s like three levels of security! It’s like the Pentagon out there now."

He also talked about us - the fans.  He said there were 10% of fans that were rabid about the Chiefs and another 10% that could care less.  The remaining 80%?  They're currently on the fence and he thinks "they are going to sink."

We're certainly not privy to many of the dealings that go on behind those locked doors in Arrowhead.  It doesn't seem like anyone is these days but the Chiefs have generally treated former players very well from my perception.

Case in point: the new Hall of Honor that's currently being constructed is to honor former players.  I still see Neil Smith out now and again working on various endeavors.  In fact, the ChiefsPR Twitter account posted a picture of Smith and former Chief Bobby Bell in the Arrowhead offices just last week.

Have things changed? According to Grunhard they have.  "Heart broken," he said.  "Completely heart broken.  It's like they've thrown the last shovel of dirt on the ex-players."

I'm not quite sure how to take all of this.

On the one hand, the Chiefs should absolutely not forget about former players.  The organization was built on the folks that played this game in the 60s and 70s.  On the other hand, Grunhard appears regularly on 810 WHB, which means he's a member of the media, and the Chiefs haven't shown a fondness towards the media.

So, is Grunhard being "aced out" because he's a former player or because he regularly appears on local media outlets?  He says this has happened to other former players but fails to cite any names or sources for that information.

Until more evidence appears, we're going to tread lightly on this one.