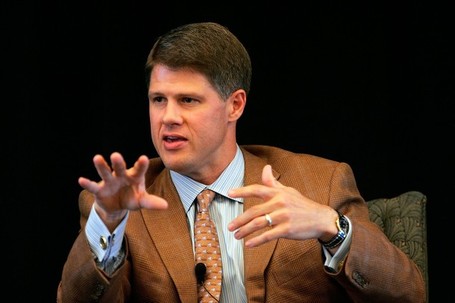 I'll admit I was a little surprised when the opportunity arose to ask Clark Hunt, owner of the Kansas City Chiefs, a few questions.

But I shouldn't have been.  The Chiefs have demonstrated on multiple levels that interaction with the fanbase and the community is a priority for them.  The renovation of Arrowhead Stadium and the team's presence in the community with a variety of charitable deeds helps prove that.

And if you follow Arrowhead Pride then you know for some time now we've made a point of highlighting all the interaction the players have with the community.  Regardless of wins and losses, it truly is a point of pride with this organization and has been for some time.

Since there are more than a few of the most dedicated fans that visit Arrowhead Pride on a daily basis, we thought it was a good match to ask the man in charge a few questions.

Oh, and, he did receive his Arrowhead Pride t-shirt.

Many thanks to Mr. Hunt and the folks that helped facilitate this.  Q&A after the jump with part two coming tomorrow.

Joel Thorman: Over the last six months, Arrowhead Pride has conducted approval ratings for some of the key members of the Chiefs.  You have yet to dip below 95% approval.  How do you feel you've done in your first three years?

With the leadership team we have put together, we feel like the Chiefs are moving in the right direction. While there's definitely a great deal of work yet to be done, our objectives haven't changed. We want to put a team on the field that can consistently aspire to win championships.

We are also striving to make the fan experience at Arrowhead the very best it can be.

Thorman: How much about the transition of ownership did you and your father talk about in the years preceding the move?

Hunt: Among Lamar's many great attributes was his ability to always be forward thinking. It was very important to him that the Chiefs remain in Kansas City and be competitive on a long-term basis. He was extremely conscious of the challenges faced by small-market teams.

Based on his experience with the AFL, I think he knew that it was in the best interests of the entire league for teams in markets such as Kansas City to remain viable. Whether it was laying out plans for the New Arrowhead, or charting a course for how it might be best to structure the leadership of the franchise, Lamar certainly had an eye on the future.

Thorman: The Chiefs have been so involved in the community recently and so many players seem to be chipping in with various local charities or their own endeavors. Are these values found throughout? Is this something you discuss with the players as an organization?

Hunt: Kansas City is a special place with an unbelievable community of fans. As Scott Pioli and Todd Haley have both mentioned publicly, they have really been overwhelmed with the reception they and their families have received in Kansas City. That certainly didn't come as a surprise to me.

As a family, we're very proud of the long-standing relationship between the Chiefs and the Kansas City community. Whether it's our annual Chiefs Charity Game or the numerous organizations our players and staff are involved in throughout the year, giving back to the community is a very high priority for us.

And yes, it's something I make a point of specifically mentioning to our team every year at training camp.

Thorman: Obviously anytime a Chiefs player is inducted into the Hall of Fame it's a special time.  But with Derrick Thomas, being the face of a new generation of Chiefs fans that came in with the Peterson/Schottenheimer era, it makes it a little more special for the younger generation.  What did his enshrinement, and having Mr. Peterson present him, mean to you personally?

Hunt: Hall of Fame weekend is always special for our family, but you're right, this year was particularly enjoyable.

First, we had Derrick Thomas going into the Hall of Fame, something all Chiefs fans have been anxiously anticipating for a number of years. We were so glad for his family to see Derrick appropriately honored. When Carl and Marty drafted Derrick it certainly signaled the start of a new era for the Chiefs. Derrick was really the cornerstone of the great playoff teams of the 1990s.

I've referenced this past Hall of Fame weekend as a "triple header" on several occasions. In addition to Derrick's induction, we had the Tennessee Titans playing as the Houston Oilers in the Hall of Fame Game as a way to help celebrate the 50th anniversary of the American Football League. Also that weekend, the Hall of Fame unveiled the Lamar Hunt Super Bowl Gallery, which is a permanent gallery dedicated to the history of the Super Bowl, which they named after my father for all of his contributions to the game.

That was a very special occasion for our family, and one of the best Hall of Fame weekends I can remember.

Thorman: After nearly two decades of training camp in Wisconsin, is there any particular memory of River Falls you'll keep with you?

Hunt: Probably the one thing I'll always carry with me is the memory of how much my parents enjoyed visiting training camp every year. Both of my parents were obviously huge sports fans and traveled the world to see sporting events in their time together (my mother, by the way, is the only woman to have attended all 43 Super Bowls).

One thing they looked forward to every year, without hesitation, was the chance to spend a few days at training camp. My dad always wanted the authentic training camp experience, so he and my mother would stay in the dorms just like the players and the coaches. Training camp always signaled the start of a new season to him, and that was always an exciting time for our family.