Herm Is Gone. It's Time To Let Him Go.

Share All sharing options for: Herm Is Gone. It's Time To Let Him Go. 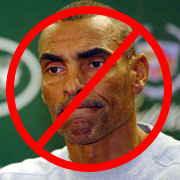 During my daily perusals of high quality content here at Arrowhead Pride over the last week, I have noticed a fascinating trend regarding the fanbase's transition from the previous head coach to the new one.

As often happens when there is change, the fanbase is polarized between those who are mired in the past and those who are interested in the present and future of our team.

Some of us are having a hard time letting Herm go, and for the most part, its not those who were once his supporters...

We are at the very beginning of a change to a new head coach which I think it is safe to say that none of us really know anything about.  Oh sure, we know that he was a student of Parcells.  We know he was the wide receivers coach for the Jets, Bears and Cowboys before becoming Offensive Coordinator for the Arizona Cardinals.

But we don't really know if Todd Haley will be a succesful head coach or not.  We don't really know if all of the "conditioning" he is so obsessed with is going to help the Chiefs win in the 4th quarter or be so exhausted by the end of the season that they won't be able to play in the postseason if they got there.  We don't really know if his seemingly merciless expectations will end up with rolling of players eyes and alienating him from his team or if they will give this squad that only won six games in the last two seasons just what they need to find their way out of the losers rut.

We all have opinions on these things, but in reality only time will give us definitive answers and there hasn't been enough time yet.

What I would like to address though, is our expectations of Todd Haley as a fanbase.  I have noticed a recurring theme in responses to those who question Haley's harshness.  It typically goes something like this:

Fan A: "Haley is a raving lunatic on the sideline.  He always looks pissed and is screaming at guys over the smallest mistake.  The players are so afraid of being screamed at that they can't think for themselves!"

Fan B: "We got nowhere with Herm's coddling!"

Now there is nothing inherently wrong with either statment.  Both are opinions and as the old joke goes, everyone has one.

What I would like to caution against, however, is that we do not delude ourselves into accepting inferior performance just because it's different, though not necessarily better, than what we had previously.  In thisexample, the insinuation being that no matter what is happening now, it MUST be better because Herm isn't here any longer.

Now I'm in no way saying Haley is going to be a failure.  As I said above, its far too early to know this.  But we need to realize that just because one extreme failed, doesn't mean the opposite extreme must automatically be better.  In this instance, just because Herm Edwards player friendly practices contributed to a horrible record the past few seasons does not mean that we should accept just as poor performance out of the team under Haley just because he is doing things differently.  And let's face it, in many aspects, this team looks just as poor so far in 2009 as it did in 2008.

Hopefully that changes as the players get used to the new schemes and new coaching styles and new players are brought in to upgrade talent deficient areas.

But if it doesn't, and considering the schedule for the next month and a half it might not, we need to not fool ourselves into being happy with more of the same but in a different flavor.  Perhaps it is satisfying to some that players that screw up are made to pay for it, but in the end if we still are a bad team with a horrible record, what good does it do?

This doesn't mean that we don't discuss mistakes that were made in the past.  But rather that we do not let the memory of Herm Edwards become an excuse for underperformance today.

Once and for all, let us banish the specter of Herm Edwards from Arrowhead Pride.  He's gone.  He can't hurt you anymore.  Gauge your expectations of the new regime not on simply being better than what was before, but by what we honestly see with our own eyes and hear with our own ears every Sunday.

Let's hope that Pioli and Haley are doing the same.