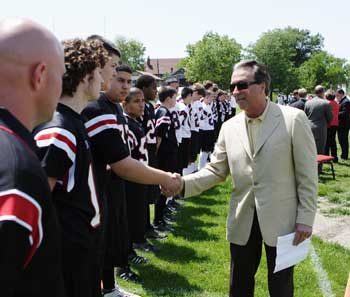 Since we've already tackled the quarterback controversy, let's move onto another subject we've spent a minute or two talking about: Carl Peterson.

There's an Associated Press article making the rounds (thanks to PFT for pointing it out) where Miami Dolphins owner Stephen Ross talks about the future of executive Bill Parcells, who has a stipulation in his contract that allows him to leave at anytime (!) and collect the full balance (!) of his $12 million contract (!)

"What he's building here, he wants to probably see it succeed and be here to bear the fruits of what he's doing," Ross said.  "He came home to a place that I think is probably going to be where he makes his last mark, his last stand, so to speak."

Ross, of course, wants Parcells to stay and continue the job he started with head coach (and former Cowboys colleague) Tony Sparano.  Plenty of folks disagree with that sentiment though.  If he should leave, then expect the Carl Peterson-to-Miami talk to start up again.  Remember back in January?  Many thought Parcells was leaving and Carl was moving in.

From a January Miami Herald article: "Peterson, I am told, was not only cozying up to incoming owner Stephen Ross during the playoff game against Baltimore, he was on the Miami sideline with Ross prior to the game. And get this: He was wearing a Dolphins pin on his lapel.

"And he was overheard talking about the Dolphins as, "We." and "We're." So it sounds like Peterson believes he's going to soon be part of the Dolphins organization in some capacity."

That was nine months ago but don't think the connection between Ross and Peterson is now lost.  They go back 25 years when the former owned Philadelphia's USFL team and the latter was the GM.

And since Carl Peterson has been the GM for the majority of my life, and along with Marty Schottenheimer was the architect of the Chiefs resurgence two decades ago, it's interesting to me so we're going to keep an eye on it.

If Carl Peterson, who has reiterated on multiple occasions that he is not retiring, heads to the Dolphins, would you recommend him?

Considering the Dolphins current situation, I absolutely would.  He was one of the masterminds behind Arrowhead stadium the place to be on Sundays in the fall and made the small market Chiefs a big market brand name.  He's got his pluses and minuses but one of those pluses has been putting butts in the seats.

H/T PSUkegreen for pointing this out in the FanShots