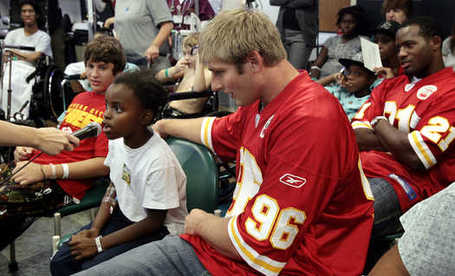 Photo by Jill Toyoshiba of the Kansas City Star

The Kansas City Chiefs and Philadelphia Eagles teamed up in area children's hospitals for a contest.  In what we hope to be a foreshadowing of this Sunday, Kansas City came out ahead.

The game: Trivia on the Chiefs and Eagles

The winner: Well, they're all winners in this instance, there's no doubt about that.  But, the Chiefs did answer more trivia questions correctly.

The two hospitals involved were actually linked via a video conference so the players and kids in Philadelphia could see their Kansas City counterparts.  Here's part of the Chiefs release on the day:

"Throughout the course of the trivia contest, it was difficult to tell if the NFL players or children were taking it more seriously.  It was funny, because when we first got there everyone was smiling and asking for autographs, noted Andy Studebaker.  Then, as soon as we linked up with the crew from Philly, the kids got very serious."

Full focus when it comes to game time?  I think I could get along with these kids.

I hope the kids in Kansas City got a little help from Andy Studebaker, who was drafted by the Eagles last year.  Kolby Smith also attended.

Why do we take the time to mention things like this here?  Because we think it's pretty cool that players like Studebaker use what little time they have available during the season, sometimes as little as one day a week, to reach out to the community. And, ultimately, we want to encourage stuff like this so the Chiefs can continue to be one of the NFL leaders in this area.