Appreciating What We Have in P Dustin Colquitt

Share All sharing options for: Appreciating What We Have in P Dustin Colquitt 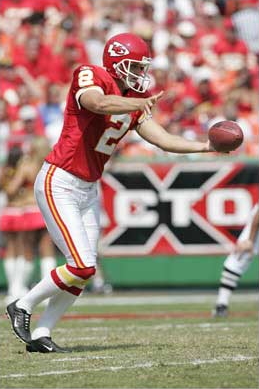 He's the unsung hero. He'll also put together more yards than any other player on the Chiefs this year - possibly by far depending on our consistency at the starting quarterback position.

Since 2005, the Chiefs have enjoyed one of the best punters in the game in Dustin Colquitt. And these last couple years, that questionable third round choice (after all, who selects a punter that early?!) has turned into perhaps the most dependable asset in these trying times. In just a few short seasons, Colquitt has already established himself as one of the game's top punters and could prove to be one of history's best in the end.

Consider this: Colquitt's 43.7 average on yards per punt ranks in the top 20 in NFL history and top 10 among active punters. Two seasons ago, he had the NFL's longest punt of the year at 81 yards and he continually ranks in the league leaders in every applicable category. He's missed two games in four total NFL seasons and his early start this year already has him is exactly on par with his previous seasons - meaning the Chiefs continue to get exactly what they expect with Colquitt.

It's easy to forget how nice it is to have a special teams performer who consistently delivers at such a high level when so many other areas rank in the "problematic" category. But with the early promise of Ryan Succop and the absolutely professional manner of Dustin Colquitt, the Chiefs might find themselves holders of one of the NFL's most talented kicking tandems.