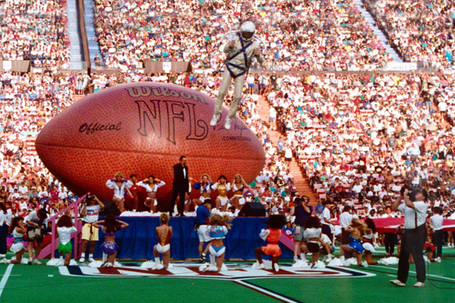 Financial down time?  Not according to those folks advertising during NFL games.  No surprise that a beer company came in first place.  Second place is where the joke is and a couple of car companies follow.

Then the NFL, which markets itself to the tune $97 million per year, including $24 million during the one month playoff run.

Coca-Cola is expected to make a return to the Super Bowl "spotlighting yet again the fact that the Super Bowl continues to function not only as a gridiron battle but also as a face-off between the nation's largest beverage marketers."

How much are the 30 second spots going for?

That's amazing but it must make financial sense if companies continue to pay this much (Insert joke here).  The Chiefs have few players on their roster that are paid more than $3 million in base salary.  In fact, the average for the team is around two million per player.

I'm sure there are reasons and data behind it, but I don't understand some of this target advertising.  Take the Taurus this year.  Ford invested in the NFL market to really push it's Taurus.

"The advertising, which kicks off with Sunday's NFL season openers, will include images of the Taurus on TV screens around the Fox studio, animated billboards of the vehicle during the broadcast and mentions of the "Ford Drive One" campaign going into and out of commercial breaks. Ford plans viewing parties on Sundays with the Taurus and a heavy presence on social networking sites."  -Huffington Post

Why?  I have no idea.  Do any of you want to buy a Ford Taurus now?  Another blogger does not want a Taurus:

"How effective does the NFL think this will be? Having a photographer wear a vest with Coca-Cola's logo on the back is not going to necessarily motivate me to go grab a coke. Are they going for the subliminal effect in hopes that the brands will register with audience?

"Last time I checked I don't even pay attention to the photographers or camera crew. I truly would like to see how effective this will be for the NFL."

Check out some of the other advertising deals companies have with the NFL (courtesy of Fast Company):

Nevertheless, CBS has sold 65% of their inventory for the game.

And I just realized I spent a whole lot of time talking about NFL advertising.