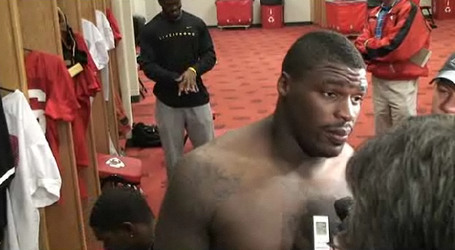 I've been hearing less and less people talk about Glenn Dorsey's play on the defensive line, which I'm taking as a good thing.  3-4 defensive ends don't always get the accolades since they're not necessarily focusing on rushing the passer, instead setting up the linebackers to get pressure.  So, less stats equal less attention for Dorsey.

Yesterday was sort of a role reversal.  Through training camp and preseason, I think a lot of us figured Tyson Jackson would get a handle on the position before Dorsey.  In the loss to the Oakland Raiders, though, Dorsey was second on the team with four tackles.

That means the top two tackles in yesterday's game were from the defensive line (Tank Tyler - 7).

Dorsey, like the rest of his teammates, wants the win but still recognizes the progress made.

"Real close, real close," he told reporters after the game.  "A play here and a play there at certain times in the game...it's frustrating when you go back and look at it and think 'Oh man, if I would have done this we would have won.'

"We're right there.  We're showing improvement and we believe in each other.  We're going to get it turned around."

One of Dorsey's comments sounded familiar. "It's the NFL, man - any play can beat you. It was yesterday that really showed that.  You've gotta play four quarters and we just didn't do that at the end."

One of the questions I've heard making the rounds is why the Chiefs defense seemed to back off on the last drive of the game.  Ultimately, those 69 yards that resulted in a Darren McFadden touchdown was the difference maker.

"I don't know," Dorsey said when asked about the defensive sets on the last drive.  "I'm pretty sure guys weren't relaxing I guess they were just making great plays and we weren't.  At that time of the game, you've gotta step up and make plays and we didn't.  Hopefully we can in the near future but we played hard yesterday on both sides.

"A loss is a loss, but I see which way we're going.  We're getting better every week."