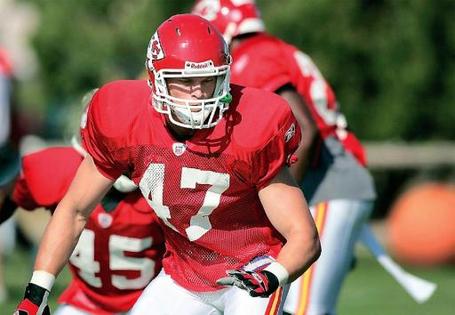 The unofficial depth chart Todd Haley and the Kansas City Chiefs released on Monday showed veteran safety Jon McGraw running with the first team.  It was a surprise, to say the least, that he replaced Jarrad Page but we're getting used to surprises on Haley's depth charts.

It was believed that Page had suffered some sort of injury since he was a late scratch against the Seattle Seahawks last Saturday night.  He was not one of the names the Chiefs said wouldn't be playing prior to the game.  So, without any information to go on, we assumed Page had some sort of injury.

When asked about Page's status, Haley gave us the 'I'm only talking about the players that are playing' quip he's been using more and more often.

This week in practice Page has been practicing and, staying true to the depth chart, has been running with the second team.

McGraw has been the beneficiary of Page's mysterious absence from Saturday's game.  Page or no Page, the results were the same.  When asked about the lack of results on the scoreboard, McGraw said it's difficult.

"We've been putting in a lot of work and you want to see some reward for that hard work," he said after the Seahawks dropped the Chiefs 14-10.  "We haven't seen it yet so it's frustrating."

If you're disappointed with the Chiefs inability to close out a game thus far, then you're not the only one. "At some point, we need to get over that jump and find a way to win a ball game at the end," McGraw said.

McGraw hasn't been discussed as a candidate to be chopped in the looming round of cuts because, in my estimation, he gives off the blue-collar vibe when it comes to practice.  He's always working hard and, as a Haley specialty, is a big contributor on special teams.

When asked if the cuts were a distraction he said, "I don't think so. I think guys are committed to working as hard as they can and doing everything possible.  That's part of the NFL every year."

"The best thing you can do everyday is focus on that and focus on practice everyday and make yourself a better player.  Hopefully, if you don't have a job here you have a job somewhere."

For the time being, it doesn't appear to me McGraw is going anywhere.  Though the cut down from 75 to 53 players always brings surprises, there's not much of a chance, in my humble opinion, that list will include McGraw.

"You hate to see guys hurt, particularly in the preseason." he said.  "You try to avoid that at all costs but it's part of the game.  But that's why you have back up players."

There's no one that knows that better than McGraw.