Chiefs Take on the Rams Tomorrow in Final Preseason Game

Share All sharing options for: Chiefs Take on the Rams Tomorrow in Final Preseason Game 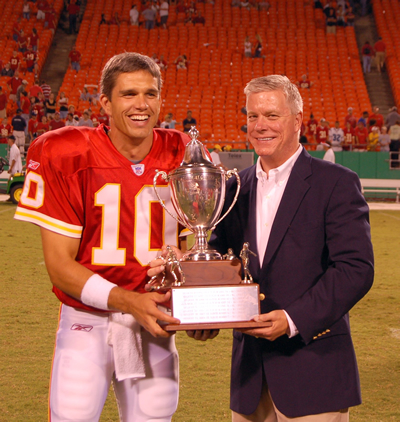 Definitely the coolest Governor's Cup picture out there.

And the coveted Governor's Cup bragging rights are on the line...

I guess. Have you ever really talked trash and cited the Governor's Cup as a justification for the Chiefs superiority? I think I may have a couple of times and it sounds crazy now thinking about it.

SB Nation's St. Louis Rams coverage is over at Turf Show Times. VanRam and company have been delivering a ton of content as of late so make sure you carve out some time to check out what they're saying over there.

And speaking of what they're talking about over there, tomahawk44 has been kind enough to post a Q&A thread at Turf Show Times which was front paged. I invite you to head over there and help tomahawk44 answer questions from Rams fans.

Both blogs were of course talking about a TV blackout but as Turf Show Times noted the blackout was lifted. Missouri rejoices.

Here are some Governor's Cup tidbits for you:

One big piece of news is that Rams QB Marc Bulger has a broken pinkie finger and will not play. He should be ready to go for the regular season but will sit tomorrow night.

We talked a lot of trash on St. Louis last year (that post includes my favorite anti-St. Louis photo) and we'll save most of that for game time tomorrow night.

Speaking of game time, it starts at 7 PM Central time and is in St. Louis in some dome. We will be doing the normal game time open threads so make sure you come by and check us out. All three preseason games have been a lot of fun around here.

Those of you in the St. Louis area, feed us some local info that I know you just inundated with. The rest of you, let us know about some of your favorite Kansas City/St. Louis interactions.

I've got a good one I'll add to the comments soon.