Share All sharing options for: How Jamaal Williams' Injury Affects the Chiefs 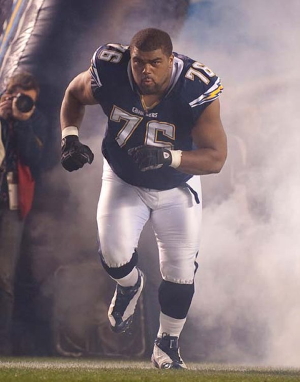 Today with the announcement that Nose Tackle Jamaal Williams is out for the year for the San Diego Chargers, that gives each team within the division a significant loss to handle this time of year. Before we knew that the AFC West was perhaps the most wide-open division in football (comparable is the NFC West, for me, because I think Arizona is horribly overrated and won't even make the playoffs - and that was before they laid an egg last Sunday).

Now? It's even more so and each team could probably flip a coin to figure out where things will shake out. The Chargers defense has a heart and soul - one being Williams, the other being Shawne Merriman. Some writers declared that Merriman began to look better as the contest went on and that he'll continue to get more comfortable back on the field after the distractions of the offseason and the injuries of last year. But a lot of the Chargers movement happens because of Williams ability to handle so many blockers on his own and this will dramatically affect the Chargers defensive scheme.

Ron Rivera will see this thing through as he's a talented mind on the defensive side, especially from his Super Bowl days with the Chicago Bears, but the hardest position to acquire in football, besides perhaps a shut-down cornerback and a starting quarterback, is a high level performer on the defensive line. And Williams is a three-time Pro Bowler and longtime starter for this franchise. His back-up? The absolutely unproven Ogemdi Nwagbuo. Yep, my thoughts exactly.

What this means is that our two contests with the Chargers just got a lot easier. For a team already struggling with stopping the run, this is great news for Larry Johnson and company. The Chargers were the pick du jour in the offseason and they still should be favored to win the division, but there's some real traction to gain with an injury like this. My guess? The Bolts will go out and find a replacement player since A.J. Smith isn't afraid to make the big in-season trade (a la Chris Chambers). But for now, this becomes easier for the Chiefs.