Share All sharing options for: Chiefs Work Out Another CB, Former Patriot 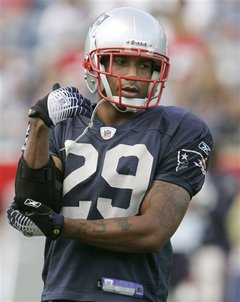 Sanders began his NFL career as a fourth round pick of the Cleveland Browns in 2000.  After four years in Cleveland, he spent two years with the Houston Texans and one with the Atlanta Falcons before making his way to New England last season.

He has five career interceptions but hasn't recorded one since 2005.  He's been in a reserve role with 29 starts in an eight year career.

While he's only recorded one kick and no punts in his NFL career, he was a proficient kick returner while at the University of Maryland.  He ranks sixth in school in history in return yards (956) and tenth (7) in interceptions.

Problems?  According to his official Patriots bio, he's been placed on the reserve/injured list four times in career.  Also, his lack of returns in the NFL is interesting considering he did well at the position in college.

Schefter reports that the Chiefs worked him out this week, which is interesting because I would have guessed they would have been more active with free agent players last week when the status of Brandon Flowers was up in the air.

Interestingly, they've all been listed at right cornerbacks, which is the position Flowers plays.  My guess is that they're keeping tabs on a few players in case his injury lingers.