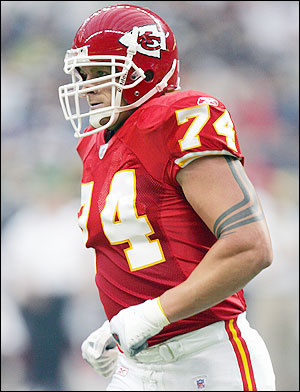 Former Kansas City Chiefs tackle Kyle Turley has retired from the game of football but still has some lingering issues from his playing days.  Turley talked to Mike Silver of Yahoo! Sports regarding some post-playing health issues he's been having.

Turley talked of an incident a few months ago that he called the scariest moment of his life.

"I was having a full-on seizure-type-thing, probably because my potassium levels were so low. I was on a table just flipping around like a fish; I was fully conscious and knew what I wanted to say, but I couldn’t speak. Realistically, if I hadn’t gone to the hospital, my kidneys could’ve shut down and I probably could have died."

Some medical experts have discussed the possibility of Turley suffering from Chronic Traumatic Encephalopathy (CTE), which killed former player Andre Waters a couple years ago.

Turley claims he received "inadequate treatment" from the three teams he played for in his career including the Kansas City Chiefs.  He talked about the possibility of suing the NFL, though he blames the NFLPA as well.  Ultimately, though, Turley wants the system changed.

Representatives from the Chiefs, New Orleans Saints and St. Louis Rams declined comment for the story.

One of the scariest things about this is that Turley thought he wasn't one of the guys that had a lot of head trauma relative to the rest of the NFL.  One NFL player, Sean Morey of the Arizona Cardinals, figured about 50% of concussions go unreported.

Silver discussed the possibility of NFL doctors having a conflict of interest.  On the one hand, they're there as medical professionals to the players.  On the other hand, they're employees of the team that wants the player on the field.

Morey expounded upon the difficulties the players face when it comes to concussions.

"Professional players naturally want to play," Morey says. "We want to keep our jobs, we have loyalty to our coaches and teammates, and we desperately want to win. Typically, when we get a concussion, our first reaction is to avoid the trainer at all costs. That’s just our mentality, our culture."

Turley told a story while with the Chiefs.  He was sitting in a cold tub with teammate Rich Scanlon following a game at Arrowhead.

"He came in and had a broken nose that was cracked all the way across," Turley recalls. "All of a sudden, in 50-degree water, he passes out. I went and told the trainers and doctors and they said, ‘He’s all right.’ I said, ‘No, he’s not. If you guys let this guy go home right now, I’m gonna file a report against you for negligence.’ He ended up in the hospital, and they kept him for a couple of days."

Keep in mind that we're hearing one side of the story.  The Chiefs declined when Yahoo! Sports asked to speak with team doctors and trainers that were involved.

Definitely check out the whole story.  And, we'll follow Josh Looney's lead in wishing Turley the best of health and success in his post-playing career.