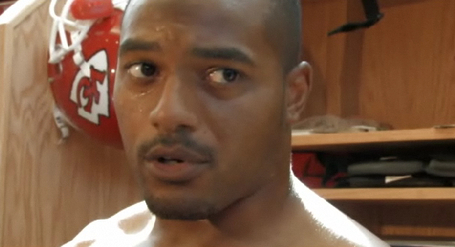 Video by Todd Feeback is available at the Kansas City Star

LJ cited the Raiders defense as a cause for concern for the Chiefs offense.

"The young talent they have on the defensive side of the ball is impressive because all those guys get excited about every play they make so it's definitely a challenge on our part."

"Obviously, Seymour, being that addition," he said.  "For someone who didn't really practice with them all week he came in and made plays.  That's something that's definitely impressive."

Seymour had one sack last game and was definitely a factor in the defense that limited LaDainian Tomlinson and Darren Sproles to 78 yards on 22 carries last week. The key against this talented defense?  Early and often according to LJ.

"It seems we get into a groove so late," LJ said after practice.  "This game we have to get out there and get in a groove real early to go against this team because they have a talented young defense.  If you let them feel they're in the game, they're going to take advantage of it."

Vegas says the Chiefs chances are pretty even.  They're currently three point favorites, although three points are generally given for homefield advantage.

"I don't really pay attention to that," LJ said when asked about being in the underdog role.  "The whole underdog thing is for Vegas bettors and stuff like that so I don't get into the points we're under and stuff like that. Anything can happen throughout the game so we just have to go out there and play hard."

How big is a game like this?  I heard Len Dawson on 810 WHB this morning and he relayed a few stories of playing the Raiders.  The games were personal back then and even through the Derrick Thomas era.  In the last few years, I've wondered whether this game means the same to these players what it did to guys like Dawson and Thomas.

LJ's been here since 2003 and has played nine games against the Raiders.  He's torched them throughout his career having rushed for more yards against them than any other team.

"This is definitely a combination of setting the tone and being in there," he said.  "This is a real, real big game.  It's a rival opponent and also a conference game so it's definitely the biggest game, being the home opener, that every should get excited about."

And, since we can't seem to get through any article without a Matt Cassel mention, here's your injury update:

"Matt looked good," LJ said.  "He bounced around, still had the same energy and same excitement so it was good to see him back in there.

"Yeah he seems a little more adjusted to hte whole knee brace thing and being able to move around.  So, each day he's getting a lot better."