New Chiefs WR Talks About His Relationship With Coach Haley

Share All sharing options for: New Chiefs WR Talks About His Relationship With Coach Haley 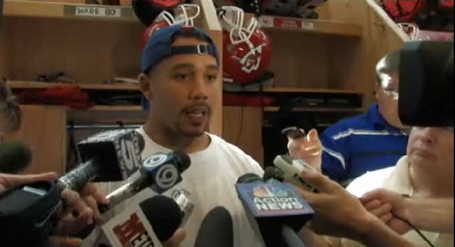 You know you have an evolving roster when I say the newest Kansas City Chiefs wide receiver talks about his relationship with the coach and you don't know who it is.

It was Wade that spoke with reporters following today's practice.

"I'm thankful to be here in Kansas City," he said.  "A team that wants to win.  I'm famililar with coach [Todd] Haley and looking forward to this opportunity."

Wade, like Long, has a past relationship with the Chiefs head coach.  Haley was the Chicago Bears receivers coach in 2003 when they used a fifth round pick on Wade.

"I'm very grateful for what I've learned my rookie year and it's really carried me a long way in these six years."

It's looking more and more like Wade will be a factor in the return game, maybe even this weekend.  Coach Haley said Wade was out on the practice field today returning punts with Maurice Leggett and Bobby Engram so I definitely think that's a real possibility.

As we talked about before, Wade's release from the Vikings was more of a numbers game than anything.  With Percy Harvin in the fold, as well as a number of younger guys in a similar mold to Wade, it just wasn't a fit.  So, he chose Kansas City partly due to his relationship with Haley and partly due to Matt Cassel.

"I want to be part of this locker room, this team and hopefully this city if everything works out."

Wade also talked about Haley being "hard" on him, which is something we're used to hear from the coach's former players.

You can view a video of Wade courtesy of Todd Feeback of the Kansas City Star.