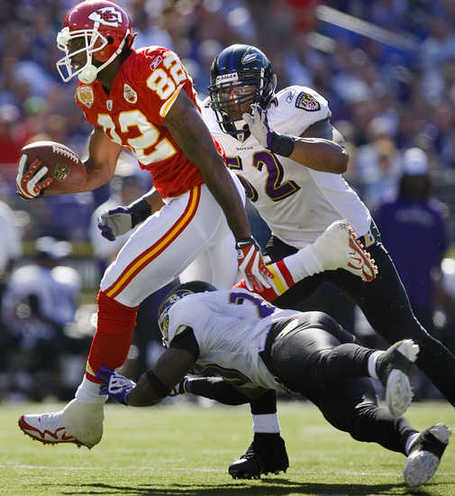 After Dwayne Bowe led all Chiefs receivers in nearly every category in preseason, and after he scored a touchdown last week, this should be a given but the Kansas City Chiefs wide out said he's "on cool terms" with head coach Todd Haley.

The local media wrote about it (so did we) but Bowe didn't bite.  The preseason games I attended this year, Bowe was already out the door before reporters were let in.

Nevertheless, the Oakland media asked Bowe about his perceived rift with coach Haley.

"Anytime a new guy comes in, just like when I came in, they hazed me," Bowe said on a conference call this afternoon. "When Coach Haley came in, he figured he’d haze me, and he did, he did a good job. He brought me back down to reality because once you feel like you’re a star on one team, all your technique and the way you perform starts to go down unless your team is good."

Bowe went through all the Chiefs hot words: conditioning, working hard, competition, etc.  He also talked about this morning's practice and the addition of Bobby Wade.

"Today’s practice was awesome," he said.  "He has WR Bobby Wade in, he is another wideout. Rotation was great, everyone was catching balls. He’s a mastermind when it comes to executing."

Wade took Bowe's college jersey number, 80, when he signed with the Chiefs.  Speaking of Bowe's college, LSU, his former teammate is Raiders QB JaMarcus Russell.  The folks from Oakland asked for his thoughts on Russell then and now.

"His first two years at LSU he was kind of quiet, he was this old country boy," Bowe said.  "Once he got the hang of it, and got accustomed to it and started playing, he got more focused, he was a more vocal leader. He led by example, he called extra meetings, watching extra film at his house."

Apparently, Bowe keeps in touch with his former signal caller and even gave him some advice last season.

"But sometimes he’s kind of a laid back guy," he said.  "And I’ve talked to him about that, even over there at the Raiders. He doesn’t need to be screaming in guys’ faces but pulling them to the side and telling them what they did wrong, or afterwards, stay an extra hour to improve your game."

Read the full Q&A at the Mothership.