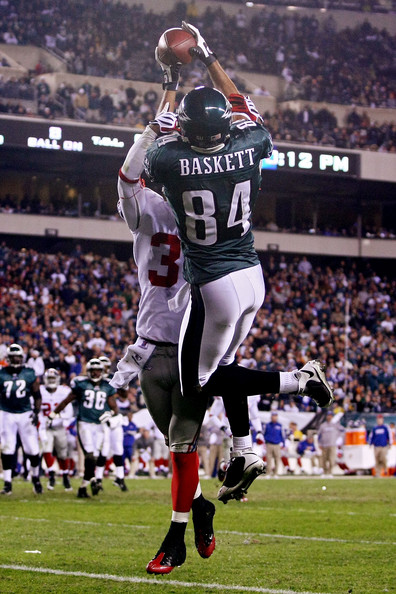 With Michael Vick now counting against the 53 man roster, the Philadelphia Eagles had to do some shuffling to make room, which resulted in the release of WR Hank Baskett.

More accurately, he was waived which means he'll hit the waiver wire with the Chiefs holding the number three spot behind only the Detroit Lions and St. Louis Rams.

According to Aaron Wilson of the National Football Post, the Kansas City Chiefs and six other teams contacted the Eagles about a trade for Baskett prior to his release.

If the Chiefs were expecting to pick him up off the waiver wire, then they'll have to hope the Rams don't grab him with the number two spot.

Stay tuned on this one.  The Chiefs exploratory calls mean there's some sort of interest there.  And he would come only at the expense of the 53rd man on the roster if the Chiefs were to sign him.

Well, not the only expense.  He was given a second round tender of $1.545 million as a RFA so whoever signs him will assume that contract, Wilson reports.

Since it will be mentioned in the comments, I'll just point out that his wife is Kendra Wilkinson of Girls Next Door fame.  Please take it easy with the pictures.

Update: Well, the update is there is no update.  Baskett was reached by phone and said, "I'm not speaking about it yet."