Share All sharing options for: Chiefs Coach on Matt Cassel's Status, JaMarcus Russell and the Raiders 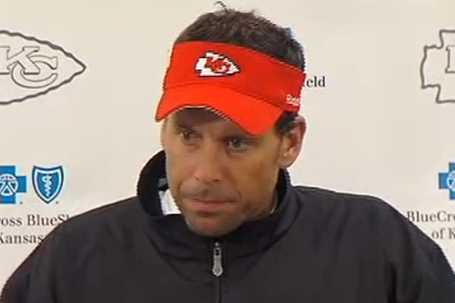 The Kansas City Chiefs head coach Todd Haley said he wasn't sure yet whether quarterback Matt Cassel would be ready for Sunday's home opener against the Oakland Raiders.

Cassel sat out last Sunday in a 38-24 loss to the Baltimore Ravens.  Reports leading up to that day were promising and said the organization had a "sense of optimism" that he would be ready.  Even Cassel himself told friends he had every intention of playing.

About an hour before the game, the Chiefs placed him on their inactive list.

"It really did truly come down to the wire," Haley said.  "We kinda repped the quarterbacks that way but in the end we thought it was the best decision for the player and the team on Sunday.

Haley described the Ravens game as a "disappointing loss to us because we had a chance to win. After reviewing the tape, special teams wise it was a pretty solid performance that our special teams unit gave us a chance to win in most areas.  I would have liked it to have been a little bit better in the return game."

So now, a week later, we start all over again.

Is Cassel going to play this week?

Haley wouldn't comment on the addition of Bobby Wade, since there were "so many moving parts" but did say they're continuing to work players out.  That probably continued today as Tuesday is the day many teams work out free agents.

"We're working out a lot more players than even the ones in the past that you've seen signed. We're looking and digging all the time.  If there's somebody out there that we think makes us better we're going to do what's necessary to get that done."

So, as of now, Haley will continue to prepare for the hated Raiders, who he calls "big, fast and physical."

"We've watched a lot of tape on Oakland and they're a good team with a lot of weapons on both sides of the ball.  The new weapon, Seymour, looks to be a disruptive force in the middle."

Here are a few other highlights from the press conference.

Q: Were you happy with yourself this past week as far as being able to do all the things you needed to do as head coach and offensive coordinator?

HALEY: "I think the operations part of it was okay. I didn’t think there was anywhere where I said, ‘geez, this is going to be really hard,’ or where I would have liked to have made better calls in different situations. I think operationally it was fairly smooth."

Q: Had you seen this year’s Oakland team before last night?

HALEY: Oh yeah. We get all those tapes and we’ve been watching them and some of last year. They have some new coaches on board that you don’t know exactly what you’re going to get. But that tape came in early this morning which was nice and we were able to break it down also and try to figure out how close it was to what they were doing. We feel like we have enough tape to prepare."

Q: Can you talk a bit about their (Raiders) quarterback position?

HALEY: "I think this young quarterback at least from what I’ve seen this year is much improved. He’s a big, strong, athletic guy who can run and can hurt you in a bunch of ways. He has an extremely strong arm and he can be very accurate. I think he showed some of that last night. He’s a hard sack, even if you get to him it’s not going to be easy to get him down because he is so big and strong. I think he is the complete package and with a year under his belt I think you’ll see him get better and better."