Chiefs LB Derrick Johnson Doesn't Like Yards on First Down 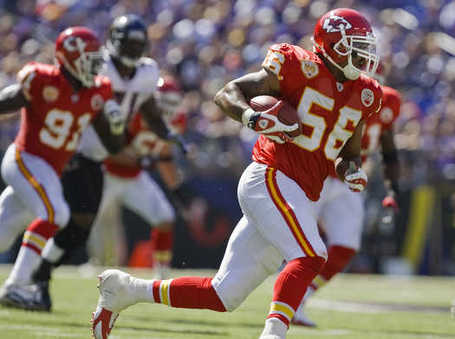 Even though he had one of the plays of the game, an interception with a 70 yard return inside the five, he wasn't happy about the result.

A few weeks ago, Todd Haley "demoted" DJ to the third string, where he's been even since.  He says he's fighting to get on the field more often and stop the opposing team from getting so many yards on first down.

The Kansas City Star caught video of the Q&A.  You can view that here.  Here are a few quotes from DJ:

"Every time I get a chance to get out there on the field, as I said last week, I'm trying to mkae plays.  I'm trying to help the team win.  Hopefully I'll get some more plays."

More quotes after the jump.

Do you feel like you need to be out on the field more often?

"In a sense.  At the same time, I didn't have that many plays so I need to be out there a little bit more to help the team.  I think the coaches will make the right decision.

"Like I said, I'm a team guy.  I just want to win at the end of the day.  If we would have won, I would have been excited about it."

On the Ravens game:

"We had a hard day on Sunday.  It wasn't all that bad.  It was just on first down - they were getting too many yards on first down.  The chains kept moving and moving.  With a tough team like that, it's tough to get going."

Do you remember, as a defense, a time having to be out on the field for so long?

Were you surprised by Joe Flacco's performance?  Did you think he was capable of that?

"Yeah, I respect him a lot.  Flacco is a quarterback that's grown a lot and it's his second year. He made some big plays in the game.

"We threw the book at him at times, and showed him some different looks and he picked it up a little bit and made some plays with his feet."

Is it first downs you have to focus on?

"Yeah, big time.  First downs.  Of course, third downs are big.  But when you get at second and four and second and five it's hard to make plays.