Share All sharing options for: Chiefs Give Bobby Wade One Year Contract 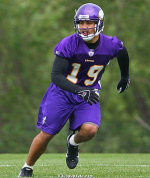 Per Wade's agent, Jerome Stanley, Wade's contract is for one year and worth more than the $755,000 veteran minimum.

As a late addition to the team, what can we expect from Wade with the Chiefs?  According to his agent, a "significant contribution" to the offense.

"He expects to play a significant role with the Chiefs," Stanley told Judd Zulgad of the Star-Tribune in an e-mail (via NJ Chiefs Fan in the FanShots).

"He and the head coach [Todd Haley] are on the same page as to his ability and expected contributions. He looks forward to being a part of the process of building a winning, Super Bowl level team, like he was in Minnesota where he made significant contributions. He wishes his friends and all former teammates well."

Here are a few of the other contracts Pioli has doled out to veteran acquisitions:

All are short and at or near the veteran minimum.