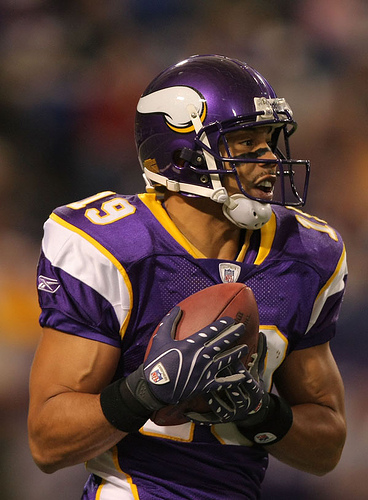 The Kansas City Chiefs have agreed to terms with former Minnesota Vikings wide receiver Bobby Wade according to Chris Mortensen of ESPN.

(Sean Jensen of the Pioneer Press has since confirmed the move with Wade's agent.)

Wade was cut by the Vikings over the weekend after previously being asked to take a pay cut.  League sources told Pro Football Talk after the fact that it's a "cardinal sin" to ask a player to take a pay cut and then release him.

The reason's behind his release wasn't necessarily a talent issue according to the Daily Norseman, who filled us in with some timely information on the newest Chief.

"The reason Wade wound up getting cut by Minnesota was basically a numbers game.  The writing probably started being placed on the proverbial wall when the Vikings drafted Percy Harvin in the first round of the 2009 draft, a guy that's also better suited as a slot receiver.

"When the final cuts came down, Brad Childress saw that he had three guys (Harvin, Jaymar Johnson and Darius Reynaud) that were basically the same type of player as Wade, only younger, faster, or both.  Wade's presence on the roster was pretty much redundant, and so he was dropped before the first game of the year.

Wade, a vested veteran, waited until after week one before signing with a team.

I talked about Wade's release over the weekend and said he has the "Chiefs Connection".  He was drafted by the Chicago Bears in the fifth round of the 2003 draft.  There was a coach on the Bears staff by the name of Todd Haley at the time.

Here's what I said then:

That connection is what led me to believe the Chiefs would be serious players in Wade's search for a new team.  Turns out I (along with a FanPost written by JacinB at the time) was right.

He saw some extended time as a punt returner in 2005 and 2007 and as a kick returner in 2006 but it's not necessarily the best idea to expect the answer there according to the Daily Norseman.

"He also has some punt return skills, but probably shouldn't be thought of as anybody's long-term solution in that category."

You can see his career stats here.

So, where exactly does Wade fit into the Chiefs offense?  The Daily Norseman weighs in.

"His optimum place in an offense is to be lined up in the slot rather than lined up on the outside.  He's not a big guy, but he's got some very good YAC (yards after catch) skills and can occasionally turn a short catch into a pretty big gainer.  His hands are pretty steady, too.

"I think the guy is an alright #2 receiver, and a dynamite #3 in the right situation."

The Daily Norseman, having watched Wade for the last two seasons, and getting an up close look at the Chiefs in the preseason, thinks he's a good fit for the Chiefs.

"Bobby Wade is a guy that, frankly, didn't get the credit in Minnesota that he probably deserved.  In his two years as a Viking, he led the team in receptions both years.  Granted, the Vikings weren't going to remind anyone of the 1998 Vikings offense in the passing department, but Wade was still much better than a lot of people would be willing to give him credit for.

"I think Bobby Wade is a nice get for the Chiefs, and I hope that he can end up playing a role in their offense."

The always classy Daily Norseman.  Many thanks for the information on the newest Chief.

Per Mort, the Colts were also interested, not the Titans as was previously believed.

This also means that a Chief will be released.  Stick around as we find out.