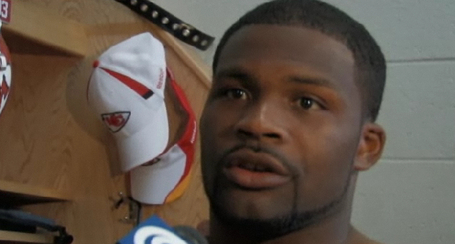 Rest assured, Kansas City Chiefs fans, the players are not feeling pity on themselves after Sunday's 38-24 loss to the Baltimore Ravens.

The spread was high and the Chiefs chances were low but they still had a chance to win at the end of the game.

That doesn't matter to players like safety Jarrad Page.  He said there are only two things that matter: Ws and Ls.

Page spoke to reporters following practice today and talked about Sunday's loss and establishing themselves at home against the Oakland Raiders.

Todd Feeback of the Kansas City Star has the video.  Here's what Page had to say:

"I think we do have confidence.  The team is so new, with so many new people on the team....I don't think enough has happened for people not to have confidence in this team.

"We just fell a little short.  But we'll come out here this week and we gotta get a win."

You were in it the entire game.  Does that give you some confidence?

"Yeah, not really.  The nly thing I take out of it is that everybody played hard and fought.  But it doesn't matter whether it's a loss or a landslide, a loss is a loss and a win is a win.  Whether you played the worst game, the ugliest game and win, it doesn't matter at the end of the day.

Does it give you some confidence that you belonged on the same field as them?

"We never thought we didn't belong on the same field as them.  Like I said, we don't take moral victories so it is what it is.  It was a tough game but we didn't win.  We lost."

On the Raiders coming to Arrowhead: