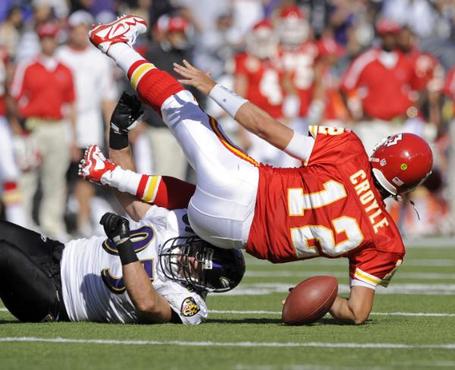 Anytime you have coaching changes (much less GM changes) there is going to be a period of adjustment, but damn, the 2009 Kansas City Chiefs under Todd Haley today sure looked a lot like the 2008 Chiefs under Herm Edwards.

The Chiefs offense gained only 188 yards in total offense while the Ravens had over 501.

However, we know this team is thin in talent. It has been for years now, ever since Dick Vermeil's veterans began retiring (voluntarily or otherwise). There were no quality players waiting in the wings to step in. Peterson had bet the future of the franchise and lost.

Scott Pioli recently said that there are 28 players that were on the Chiefs roster at various points last season that are no longer on an NFL team. That really shouldn't surprise us since many of those players were "on the street" when they were brought to the Chiefs in the first place.

That speaks volumes of the state this franchise was left in, and is a reason for the continuing struggles despite the change in coaching and management.

However, rather than every week hashing and rehashing just how terrible this team is, let's line out the problem areas and track them and their improvement (or lack thereof) as the Pioli / Haley team work on turning this franchise around after each game.

Pass Rush - Against the Ravens, the Chiefs had one sack (Tamba Hali) which also resulted in a fumble. Aside from that, they did not register a single official quarterback hurry, which is defined as "an incidence of a defensive player forcing the quarterback to act faster than the quarterback was prepared to, resulting in a failed offensive play."

Flacco was rarely knocked to the ground and at times had as much time as he wanted to throw the ball. Despite the sack, I think there is still a LOT of work to be done in this area.

Run Defense - The Ravens had 198 yards rushing, averaging 4.7 yards a carry. That is god awful. We have tons of talent and a very large amount of money dedicated to the defensive line. This has to improve.

Personally, I can't fathom why one of the teams worst units last year, the defensive line, kept its coach Tim Krumrie. If all that talent on the D-line continues to underperform the rest of the season, Krumrie damn well better be replaced.

Pass Defense - This largely goes hand in hand with the lack of pass rush. If the QB has all day to throw, he can set his feet and scan the field for the open receiver. Brandon Flowers being out definitely hurt, but Maurice Leggett did reasonably well filling in, especially considering Ravens offensive coordinator was picking on him most of the game. The linebackers pass defense remains a serious weakness. The linebackers continue to be a serious liability in pass coverage - something that MUST improve as the Chiefs continue their transition to the 3-4 defense.

On the bright side in this regard, Derrick Johnson DID have an interception and a big return.

Offensive Line - The Chiefs offensive line gave up 3 sacks, and 8 tackles for loss. The Chiefs had 29 yards rushing for 1.7 yards a carry.

Enough said. This unit isn't getting it done and needs to be priority #1 for Pioli to fix by the beginning of NEXT season (as it SHOULD have been before THIS season).

Quarterback Situation - We still don't know about this one since its all riding on Matt Cassel and he didn't play today. The offense had a tough time getting going, but Brodie Croyle did post a 116.0 QB rating and a 66.6 completion % with no interceptions.

For a backup, that's about all you can ask for. But its not going to cut it for a starter.

Again, the Baltimore defense isn't really the best opponent to try to make headway against, but this is something that has to be fixed.

Kicker - Yay! Something to be positive about! Every time Succop comes out I'm keeping my fingers crossed that it hasn't all been a dream. A reliable field goal kicker would have meant the difference between a win and a loss in several games last year. Let's hope he keeps it up.

I am confused about the occasional line drive kickoff, however. I don't know if he's being told to do that or if he's just not hitting it right. It makes no sense to me why he could kick it out the back of the end zone one kick and the next they are doing a line drive kick being caught on the 20 and run up.

Kick Returner - This is another area I felt should have been addressed in the offseason that wasn't. They let last years 6th round pick Kevin Robinson, who was supposed to be a return specialist (despite the fact he hadn't done much last year) go before camp despite the fact there was no one else on the roster with experience doing it. Just one of several moves that confused me.

Anyway, I don't see anyone on the roster that is going to be a worthwhile returner. Leggett scares me because he's muffed several punts already. Jamaal Charles is fast, but doesn't seem able to get it much past the 25. Another area we will have to watch over the course of the year.