Share All sharing options for: Injured Chiefs QB Cassel Told Friends He Had 'Every Intention' of Playing 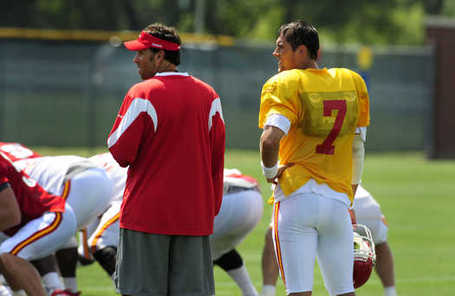 According to Tom Curran of NBC Sports (by way of nycchief in the FanShots), Kansas City Chiefs quarterback Matt Cassel thought he was going to play.  He went so far as to tell friends that he had every intention of playing.

If that's the case, then it appears that the Chiefs coaching staff, with input from the medical staff, put a stop to his first regular season game as a Chief.  Two weeks ago yesterday, Cassel injured his MCL which unconfirmed reports gave him a 2-4 week recovery time.

Earlier in the week, during a press conference usually reserved for the starting quarterback, he told reporters that if it were up to him, he would be playing.

"That is why we have a training staff here," Cassel said.

"If I wasn't able to go, they would hold me back and that is what their job is. As long as I am able to walk and get out there I will be ready to go and it is their job to pull me back."

Todd Haley, however, indicated he hadn't made a decision.

Dating back four days ago, multiple media outlets said there was a ‘sense of optimism' that Cassel would play.

He practiced on Monday, day off on Tuesday, then again on Wednesday, Thursday and the walk-through on Friday.

He was limited throughout practice and was labeled as such on the first official injury report.  The Chiefs listed him as "questionable" for the game which, according to the NFL's designation, means he had a 50-50 chance of playing.

Ultimately, Cassel didn't play even though he was seen on the field prior to the game throwing passes with the Chiefs three other quarterbacks.

He wore a brace on his injured knee before the game.  He was in street clothes during the game.

In his place, Brodie Croyle performed admirably.  He completed 67% of his passes for 177 yards, two touchdowns and no interceptions.  He was sacked three times but, considering the circumstances, that seems bearable.