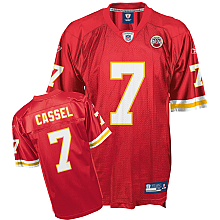 Josh Looney is reporting that Kansas City Chiefs quarterback Matt Cassel will be listed as inactive for today's season opener against the Baltimore Ravens in M&T Bank Stadium.

That means we will not see Cassel today.  The Chiefs instead will rely on a trio of quarterbacks: Brodie Croyle, Tyler Thigpen and Matt Gutierrez.  Croyle has been named the starting QB.

It's been widely speculated that if Cassel can't go, Croyle will take over the reigns.  The latest depth chart has Croyle listed at No. 2.

This is surprising to me.  He was on the field with a knee brace on throwing with the other quarterbacks just a bit ago.