Will Your City Show the Kansas City Chiefs Game?

Share All sharing options for: Will Your City Show the Kansas City Chiefs Game?

Shawn put this in a FanShot yesterday but here's the NFL distribution map for the early games today (courtesy of The 506): 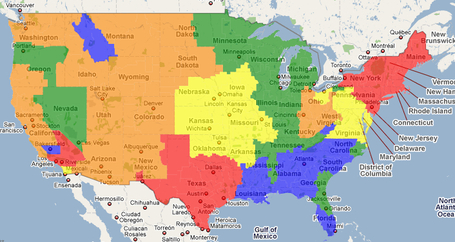 If your city falls in the yellow, you will see the Chiefs game.  If it does not, then you've got satellite or some sort of way to watch online (which I know nothing about).

Tonight on NBC it's Bears at Packers.  Then two Monday nighters starting with Bills at Patriots and Chargers at Raiders.

If you haven't checked out The 506, then you should.