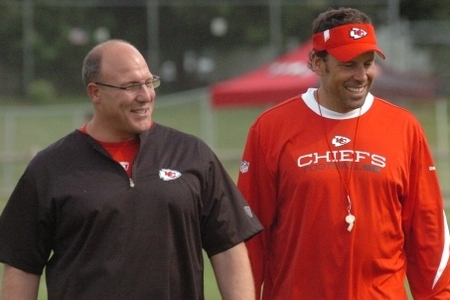 You didn't know there was a salary cap minimum?  Well, there is.  And it requires the Chiefs to spend 87.6% of the salary cap according to the current CBA.

As of now, the Chiefs are still $7 million short of hitting the minimum according to Alex Marvez of FOX Sports (Thanks to nycchief for the link).

Here's how the top three in salary cap space rank:

I'm not sure exactly how the cap dynamics work but Marvez reports the Chiefs are the only team under the minimum.

The Chiefs are going to be spending $7 million either way.  If they don't use it on the current team, then it will be split between every player that has appeared on the Chiefs roster since training camp (August 1st).

On several occasions, GM Scott Pioli has reiterated that he wants to spend smart and not let the money burn a hole in your pocket.

Unfortunately, that $7 million is going to burn a hole in Pioli's pocket one way or the other.

Marvez said one way to get over the hump would be extending a player's contract.

"Linebacker Derrick Johnson is the top Chiefs player whose contract expires at season's end," he writes.

"But under new CBA rules set to begin in 2010, the number of complete NFL seasons required for unrestricted free agency jumps from four to six seasons. That means Johnson will become a restricted free agent whose services could be retained for a lesser price in 2010 than a long-term deal."