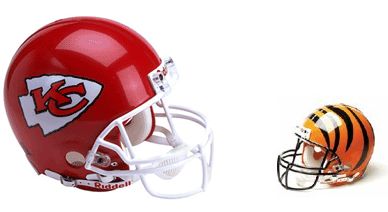 Two days after Christmas the Kansas City Chiefs will travel to play the Cincinnati Bengals.  If you're an Arrowhead Pride reader in the state of Ohio, it's a possibility the game will not be aired locally so we'll be your main source of information for the game.

In our prediction series of AP authors, we've got the Chiefs at 8-6.  Seriously.

The Bengals finished the 2008 season 4-11-1 with the worst offense in the NFL.  Of course, that should be much different this season assuming quarterback Carson Palmer stays healthy for the season.  His injury, which caused him to miss 12 starts, especially hurt Chad Ochocinco, who caught 53 passes for 540 passes in an injury plagued season.

We do have one Chiefs/Bengals connection that popped up over the offseason.  The Chiefs picked up C Eric Ghiaciuc from the Bengals and in an interview with the local media, he said Ochocinco was a bit of a distraction to the team.  Chad's response?

"Ghiaciuc's play was a distraction. Of all people to call me that."

The Chiefs ended the 2008 season on a low note with a 16-6 loss to the Bengals.  In the locker room after the game, Larry Johnson professed a desire to leave Kansas City.  That was kind of the start to the Chiefs rocky beginning to the offseason.

So, their offense wasn't very good last year but that should change with Palmer back.  They've got some young talent on defense and have the potential to be very good on that side of the ball.

We've asked Mr. Kirkendall from Cincy Jungle to help us preview the Chiefs/Bengals game.  We asked him some questions and his answers are after the jump.

You're the Chiefs defense.  What's the first thing you have to stop with the Bengals offense?

Historically, the Bengals were always a rhythm team. The best way to break down our offense is that we’ve always been a pass-first, run-second kind of football team.

If you can generate a pass rush and force a ton of pressure on Palmer, you might not just get the sack, you could force him into a bad throw.

As Chiefs fans, we know plenty about first day draft picks not panning out.  Can you talk a little bit about the frustration with Keith Rivers going down last year and now Andre Smith's rocky start?

When Keith Rivers was injured against the Steelers, the Bengals were already 0-6. We didn’t have a chance at making the playoffs and our disappointment factor was already in overdrive. It was like one of those moments where you just put your arms up in disbelief and wonder what else could possibly happen.

But we’re used to disappointing first years from our first round draft picks; through lack of play, disappointing play, or just injury. Smith is in the same boat. He goes from prolonged negotiations to an injury that will definitely keep him out through the first week – and most likely the first month.


This game comes in week 16 so we'll pretty much know what type of team we are at that point.  Do you think in week 16, if the Bengals are playing decent, it will be because mainly because of good play from the offense or the defense?

Our defense will bring our level back up, no doubt. There are too many questions with our offensive line to suggest we’ll get that 2005 magic back. The Bengals finished 12th on defense last year and added talented rookies like Rey Maualuga and Michael Johnson and acquired veterans Tank Johnson and Roy Williams.

We always expect a lot from our offense; our defense could be the biggest reason we we’re still competitive by week 16.

Many thanks to Josh for answering our questions. Read more about the Bengals at Cincy Jungle.

Check out all of our season game previews at this link.

A better and healthier season from the Bengals means a 24-13 Chiefs loss.