Runyan Ready But Chiefs, Others Haven't Made a Contract Offer

Share All sharing options for: Runyan Ready But Chiefs, Others Haven't Made a Contract Offer 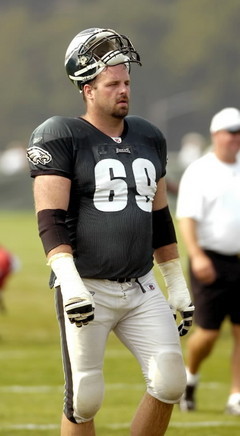 Free agent right tackle Jon Runyan says his knee, which required microfracture surgery over the summer, is doing better than expected and he hopes to sign with a team and contribute immediately Sal Paolantonio of ESPN reports.

"I thought I might have some swelling with all the workouts, and all this time sitting on airplanes, but it hasn't happened," said Runyan, 35. "I haven't had any swelling and no pain. So, that's a good sign."

According to Paolantonio's report, he has worked out for the Philadelphia Eagles and Buffalo Bills in addition to the Kansas City Chiefs,  However, no contract offer has been made by any of the teams.

Runyan expects there to be some movement following Sunday's season openers.  If he's on a team's roster as of 3:00 PM (CST) today then, as a vested veteran, his contract would be fully guaranteed for the 2009 season.  According to the rules governing the current collective bargaining agreement, if a team waits until after week one, they are only financially committed to a vested veteran for four games, not 16.

The Chiefs, Eagles and Bills all have dire needs at the right tackle position.

The Eagles' Shawn Andrews is out for Sunday's game.  They are starting Winston Justice who, in his last start, allowed the Giants Osi Umenyiora to threaten Derrick Thomas' record with six sacks in a 2007 matchup. The Eagles are familiar with Runyan which has made most folks assume that, if all offers were equal, he would rejoin the Eagles.

The Bills have completely revamped (revamped?) their offensive line from last season.  Langston Walker is gone and the Bills worked out Runyan in addition to five other tackles according to Brad Biggs of the National Football Post.  So, they certainly have some interest in a tackle.

That leaves the Chiefs who are in as desperate a situation as the others.  The revolving door at right tackle, coupled by the need to protect the $63 million man, makes a right tackle a near necessity.

Tick-tock, tick-tock.  The clock is ticking on Runyan's next move.  We're expecting to hear something early next week since, according to the player, he'll need a full week of practice to be ready.

"I'm ready to play," said Runyan. "I'd just need a week of practice to get my timing down and I'd be ready."