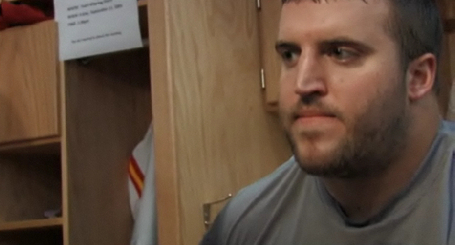 One of the under-looked aspects of the question marks at quarterback as the Kansas City Chiefs prepare for the Baltimore Ravens is how the offensive line is taking everything.

Continuity (Thanks, Herm) plays a bigger role in the offensive line's preparation than any other position group.  It's rarely a lineman doing his job against the defender without regard for what his line-mates are doing.  It really is a unit in the truest sense of the word.

Tyler Thigpen being behind center rather than Matt Cassel or Brodie Croyle presents a different set of issues for the line.  For some players, Thigpen's mobility (and to a degree Cassel's as well) is a good thing.  Damion McIntohsh seemed to respond well to the implementation of the ArrowSpread last year while others struggled.

As the Chiefs prepare for the Ravens, new guard Andy Alleman says the indecision at quarterback shouldn't affect he or his teammates too much.

Alleman spoke to reporters following practice and Todd Feeback of the Kansas City Star has a video up.  You can view that here. Below, I've taken notes on what Alleman had to say.

Do you feel pretty good going into the first regular season game?

"We feeel good. This team works very hard.  Coach stresses being well conditioned and working hard. We've had a good week of practice and it should be exciting getting ready to go this weekend."

Scheme-wise, are things starting to fall together?

Does the question at quarterback hurt you cohesion-wise?

"I don't think so.  That's one of things we leave up to management.  As a player, you can only take care of yourself.

"As an offensive line, you try to look out for each other and do the best you can as a unit and go with whatever decision management makes."

Do you like the talent level on this team?

"We'll have to find out.  That's what everybody asks every year so we'll find out soon enough."