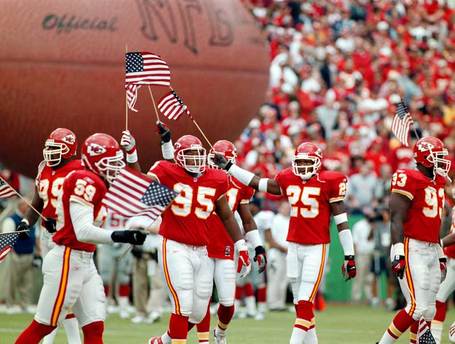 Eight years ago to the day, one of the most horrific terrorist acts occurred in New York City.  It was a Tuesday and soon after NFL Commissioner Paul Tagliabue suspended the weekend's games.  The Kansas City Chiefs were to play the Seattle Seahawks that weekend but the game was moved back to January 6th.

The following weekend, however, football returned.  On September 23rd, in one of the more memorables losses in Arrowhead Stadium history, the Chiefs hosted the New York Giants.

Josh Looney remembers a few things about the game over at the Mothership:

Tagliabue delivered a pregame address to the Arrowhead crowd, which greeted the Giants with a rousing ovation.

Via a fireman’s boot collection that was matched by the Chiefs and the Hunt family, a total donation of $451,413.88 was raised for relief efforts in New York City, an amount believed to be the largest single-day outpouring of spontaneous support by a group of fans and a pro sports team.

The picture above speaks volumes about the emotions that were streaming through everyone that day.

I remember that day.  I was obviously eight years younger at the time but I still remember how happy I was that football was back and some semblance of normalcy was returning.

When the national anthem played, it was the first time I can remember that the Chiefs didn't do their patented "...and the home of the CHIEFS!" yell.  Out of respect, the fans and the team curbed that for the day.

The Giants won the game 13-3.  But, at the time, it just didn't seem to matter.  I was just happy football was back.