After the Chiefs, Jon Runyan Works Out for the Eagles

Share All sharing options for: After the Chiefs, Jon Runyan Works Out for the Eagles 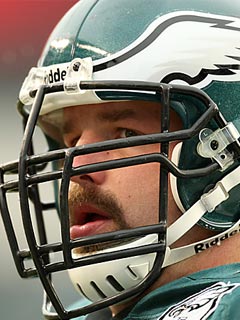 The Kansas City Chiefs worked out veteran right tackle Jon Runyan earlier in the week according to Brad Biggs of the National Football Post.  If the Chiefs are interested in signing him, they might have some competition.

In case you were wondering why the Chiefs hadn't made a move yet, there's two likely reasons:

1.) They're not interested in signing him after reportedly working him out

2.) They're waiting until after week one when his entire 2009 salary wouldn't be guaranteed.

If Runyan, or any other veteran, is on the roster for a team's opening game, the full season salary is guaranteed.  If they wait until after week one, only a max of four weeks of game checks will be guaranteed.

As Mike Florio of Pro Football Talk speculates, look for there to possibly be a "mini-auction" for Runyan's services following this weekend's games.  There are reportedly two other teams interested in the 13 year veteran and he apparently already turned down a contract offer from one team.

Jason over at Bleeding Green Nation recently talked to us about Runyan in light of the Chiefs workout:

"Also, he's not going to want to be a backup," Jason says.  "He never has and it's just not in his nature. Maybe at first while he tries to get back in shape... but soon he's going to want to play every down. He's been saying all summer that if the Eagles were to sign him back that he'd win the starting right tackle job no matter who he faced."

If he's looking for playing time, then I imagine the Chiefs offer the best opportunity.