Share All sharing options for: Picture of Chiefs RB Larry Johnson is the Ravens Motivation for Sunday 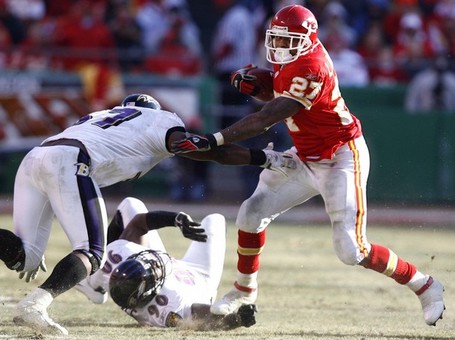 According to a WNST, the Baltimore Ravens "may" have a picture of Kansas City Chiefs running back Larry Johnson in their facility as motivation.  LJ was the last back to rush for over 100 yards against the Ravens in 2006.

The only question is, what picture is it?

LJ's motivational picture might be Terrell Suggs doing LJ's trademark dynasty hand symbol, which Suggs threw up in their last meeting.  According to LJ, he's not upset about it, even though Suggs was admittedly trying to "disrespect" the Chiefs running back.

"What’s so funny about that is, we ran into each other at Super Bowl weekend after that season, and he was like, ‘Are you mad at me?’ I was like, ‘No, I’m not mad at you,’" Johnson said during a conference call with Baltimore media yesterday. "He thought we actually had some type of beef off the field, but it was just being competitive, and I expect it to be like that on Sunday."

Ravens LB Tavares Gooden said being concerned about the streak of not allowing a 100 yard rusher would be the "wrong thing" according to WNST.

New defensive coordinator Greg Mattison says the defense's biggest goal is doing one thing - stopping the run.  Considering the streak, I'd say the Ravens have done a pretty darn good job of that.

Defensive tackle Kelly Gregg says the Chiefs will be a "good challenge" for them while other members of the team echoed his sentiments of not overlooking the Chiefs.

The Chiefs best hope for getting LJ another 100 yards will be an injury to DT Haloti Ngata.  He was limited in practice due to an ankle tweak from the previous week.  He says that's just a precautionary measure and the injury will not limit him against the Chiefs.

It looks like the Ravens are ready for Larry Johnson.  Only question is whether the Chiefs offensive line is ready for the best run defense in the NFL.