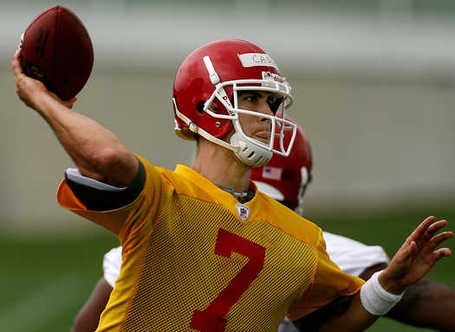 We’ve assembled a panel of "experts" consisting of AP bloggers and front office folk. There are 8 AP members submitting rankings each week. Each "expert" is responsible for covering a division and providing a blurb for each team to accompany the rankings.

Here are your AP Experts:

Rounding out the panel at an even 10 will be AP’s fearless leaders, Chris and Joel. A huge thanks to all of our experts for donating their time and effort to keep these Power Rankings going each week. Look for the weekly Power Rankings to appear every Thursday, so long as Woodman212 can manage to find a computer with excel before then.

Each AP "Expert" ranked each team 1-32. The rankings were averaged out so the number you see next to the team is the teams average ranking. In the case of a tie, which happened this time around with the Vikings (#8) and the Titans (#7) we take the best and worst ranking for each team, drop them, and re do the average. In this case both teams had an average rank of 8.4. From the Vikes we dropped a high of 4 and a low of 19 and for the Titans we dropped a low of 3 and a high of 19. When the dust settled, the Titans were more consistently ranked among our panel, edging out the Vikings 6.2 to 6.5.

I’ll let you scroll down to see where our beloved Chiefs landed. We are excited to bring you these rankings each week and we are all looking forward to your thoughts and sure as I am typing this, criticisms! Enjoy!

P.S. Be on the lookout for our "Put Up or Shut Up" season predictions later today. This way you can look back and ridicule us for our ridiculous predictions after the season. We’re going on the record later today!

The Steelers are Cesar until someone else stabs them.

Will continue to be one of the dominant teams. Especially with Brady's Return.

Still have a dominant rushing attack and a ferocious defense. Their lack of a big-play threat keeps them out of the top 2.

There will be less drama between quarterbacks than forecast. They have the potential to dominate this season.

Did the Ravens do enough to unseat the Steelers? I don't think so.

They will miss Dungy a lot. When most coaches take over for a Hall of Fame coach it backfires.

Well, the defending NFC North Champions added a legitimate vertical threat to a great running game and a Top 5 defense. This could be a potential Superbowl team.

The NFL's ultimate under achievers. They'll win a weak division, not much else, and the door is closing.

GM Jerry Angelo mortgaged the future so he could win now with Jay Cutler. Perhaps he should have also gotten someone for Cutler to throw to.

Packers were instantly better when McCarthy hired Dom Capers as D-Coordinator. Assuming Aaron Rogers continues to progress, they could challenge the Vikes for a NFC North Title

As one of last year’s biggest surprises the Falcons have to prove it wasn't a flash in the pan. The offense should be better and more balanced but they still have a lot of questions and holes on defense.

The Saints offense is just as explosive as ever and the defense has undergone upgrades the only question now is if this aging team can stay healthy.

The Panthers set out to shake the NFC South Champion curse and be the first back to back NFCS champ since the division was formed seven years ago.

With a dynamic offense and adequate defense the divison is Arizona's to lose. Can they break the curse of the SB losers?

It will be interesting to see their offense without a playmaker like T.O. Until then they are a middle-of-the-pack and unknown team.

They surprised us last year with their good playing abilities. Will be no surprise this year.

I think it is their time. Matt Schaub will be healthy and leading a great offense.

The Seahawks have almost as much potential as they have questions. Seattle's biggest opponent is the injury bug.

Haynesworth makes a "Good" defense "Very Good" but it is the offense that stalls every Sunday.

We'll see if a rookie can lead this team to victory.

The Jags are too reliant on the running game and their D is breaking down.

Is Carson Palmer's retun enough to make the Begals relevant again? We're about to find out.

San Fransisco has a good running game, defense and coach. Is Shaun Hill good enough to get out of the way?

Can T.O. Help them out or bring down the team? I think he'll do just fine.

New blood, new attitude, new hopes. This will be the year a successful foundation is laid.

New quarterback, new coach, new players on both sides of the ball. It’s a rebuilding year in a tough division with a tough schedule.

Great O-line, but nothing worth protecting. Do have the pieces for a bright and competitive future.

The Bowns will be tougher than people think this year. How tough depends on how much change their new coach has brought to what was a dysfunctional locker room culture.

When you're season goal is to be in close games, it doesn't look good.

Young and talented, but with a Sith Lord as an owner/operator/overhead projector collector, they'll fall flat. Needs a complete front office overhaul…starting with the owner.

IMO naming Stafford week 1 starter was a big mistake. He doesn't have the personnel around him that Ryan or Flacco had last year….looks like another long year in Detroit