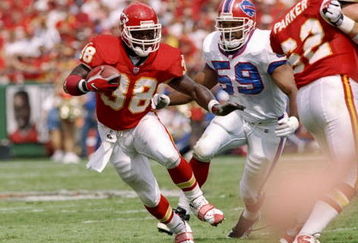 The former Kansas City Chiefs fullback is currently the head coach of the Northeast High School football team and was recently announced as the week two recipient of the Chiefs High School Coach of the Week Award.

"The 2009 High School Coach of the Week program is a joint initiative of the Kansas City Chiefs, the Chiefs Ambassadors and the National Football League.

"Supported locally by the US Army, this program is designed to recognize and reward Kansas City area high school coaches for superior performance throughout the year."

Anders' squad beat Westport 12-8 in a defensive battle that would have made Herm Edwards proud.

A Chief ambassador and a US Army representative will present Anders with the award this afternoon.

A nice honor for a former Chief.  Anders was a darn good Chief for ten years.  In six seasons, from 93-98, Anders caught 345 passes and rushed the ball 495 times.  In the running game, he was a blocking back but, in the passing game, he was a weapon.

Anders is a member of the Chiefs ambassadors, which is a group of former players that, together with the organization, promote goodwill throughout the community.

Congratulations to one of my favorite Chiefs!