Chiefs QB Brodie Croyle on being the Starter Against the Rams

Share All sharing options for: Chiefs QB Brodie Croyle on being the Starter Against the Rams 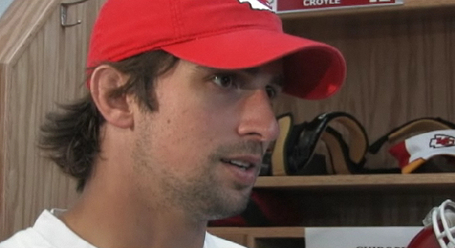 Kansas City Chiefs quarterback Brodie Croyle spoke with the media today following the news that he has been tabbed the starter for Thursday's preseason finale against the St. Louis Rams.

He talked about the faster pace with Todd Haley as the offensive coordinator and his preparation now that he will take the field as the starter in two days.

You can watch the video, courtesy of Todd Feeback of the Kansas City Star, here.  Or, you can read the notes I've taken on the interview after the jump.

On Todd Haley as the new offensive coordinator:

"It's obviously different.  The pace is different, how the plays are called, the tempo and just kinda getting used to how he thinks. We're still a long way off from knowing exactly what he's thinking on different calls. But the more you get used to somebody the more you can kinda anticipate what they're going to call.

"It's definitely different, the terminology or whatever, but there's no excuses.  Just go out there and learn it, have some accountability and play."

But he wants to be faster, right?

"Yeah, get up there and get moving.  Have lots of offensive plays. Makes sense, the more plays you have the better chance you have of scoring.

"It's just a different tempo, a different style of play calling.  You know, every offensive coordinator is going to be different.  This is the same case, no different."

What about you preparing this week to get the start against St. Louis?

"Just go out there and play within yourself and whatever happens, happens."