Chiefs Tab Brodie Croyle the Starter Against the Rams

Share All sharing options for: Chiefs Tab Brodie Croyle the Starter Against the Rams 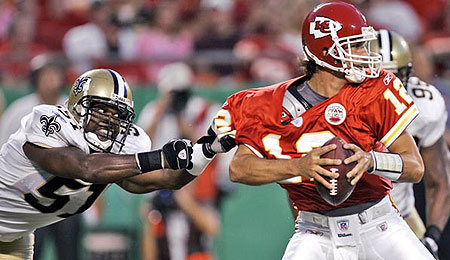 610 Sports is reporting via it's Twitter account that Brodie Croyle will start the Kansas City Chiefs final preseason game.  Josh Looney is also reporting the move.

The Chiefs play the St. Louis Rams Thursday in a short week.

Does this mean that Croyle is the starter in week one if Matt Cassel is unavailable?  We're not sure yet but it's looking more and more like it.

Haley said Croyle's performance will depend on the success of the offense.  He also indicated that this game could determine who is the No. 2 quarterback heading into the regular season.

Adam Schefter of ESPN reported that the organization thinks Cassel will be ready to go but, if he's not, my money is on Croyle being the starter.

Bob Gretz is also reporting that Donald Washington will replace injured Brandon Flowers in Thursday's game as the starter.