Todd Haley: 'I'm going to bring the Chiefs back'

Share All sharing options for: Todd Haley: 'I'm going to bring the Chiefs back'

The above quote (in the title) is far and away the money quote from these three interviews.  It's good to see our Hall of Famer Len Dawson interview Cassel, Haley talking about coming to work in the mornings and whether Pioli has second thoughts about the Matt Cassel contract.

On being a leader as a quarterback:

"It's a position, as a QB, even though you are a backup, it's something that you're kinda born with I think. It's something I embrace. I love interacting with the guys, having a say in what's going on, where a route should go and I think that's part of being a leader.

"And also I think being a leader is showing the dedication in the weight room in the offseason, being here on time, showing up early, staying late and proving to these guys you're going to do dedicate your time and energy to doing whatever is best for the team.  First, you show by what you do then you can start to have a little bit more of a voice."

What are your expectations this year?

"My expectations are to win.  We have a young football team, a new coacha, and I know sometimes it's a process, but Coach Haley is in there pushing them everyday. He's energetic, he's enthusiastic.

"He brings with him a great system from Arizona, very similar to what we did with the Patriots so I think schematically it's bringing in the right system, bringing the right guys in, getting on the right page and we can have some success.

"We've got enough players here, and good players, that we can do some special things."

As a back up quarterback, how do you do so well with the media and say the right things?

"I was a communications major in college so I had a few classes here and there that I did some public speaking (Laughs).  Other than that it's watching NFL Network, ESPN and guys like yourself and thinking, 'I like what he said.'"

On the new job at Arrowhead:

"My whole life's really been about football.  I had a little side track where I tried to show I can do my own thing but it's all worked out.

What's the plan for the Chiefs?

"The plan is to do what I've been taught all along.  Coach the way I coached and try to get my coaches to coach the way I think it gives you the best chance to win.

"It's nothing exotic.  It's nothing simple.  Keep a high standard and make sure the player's standards or expectations are never lower than ours. To push them hard every day, to be the best they can be."

"My expectations are just to be better each and every week starting now. If next Saturday, we're a little better than where we are now then I'll feel like we're making progress.

"I don't want to be a yo-yo team that's up here this week and down here next. Just like I don't want yo yo players. I want the same guys every day. Even if you're not great, if you're the same guy we know what to expect and we can find a way to work it.

"If we can continue to make progress each and every week I'll be happy."

"I'm going to bring the Chiefs back."

How did you feel when Clark Hunt offered you the job? 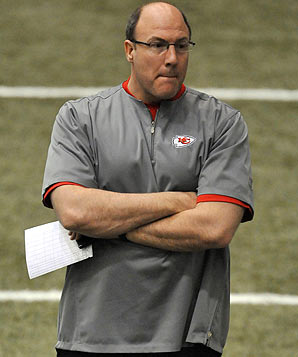 "It was a little surreal to be honest. Because I hadn't been in a situation like this. All previous jobs I had kinda gone with a group of people and this was a situation where I was kinda out on my own.  I felt deep down inside this is the job I wanted. This is what I hoped it would be.

Is the job what you thought it would be?

"Yeah, in a lot of ways.  Some things are the way I thought it would be, some aren't.  But I think that's part of any new situation. You can only know so much from the outside.  Until you're immersed in the environment yourself you start to find things out.

"But the people I've felt the best about that I knew started with Clark. He's everything I thought he would be and he's been great so far."

On the lessons he's learned:

"The lessons he taught me about hard work, providing and having a job and when you have a job you need to respect your job and that you have people counting on you to do your job. It's really important because it extends beyond your family. You have a responsibility to your family tohave to take care of them but beyond that there's people counting you to do your job."

On picking the right people for the Chiefs:

"But the lessons I learned at home, again from my parents, siblings and my coaches, is that it all comes together.  What you learn as a human being, in terms of pulling groups together, those things are all applicable."

On the Matt Cassel contract:

"Second thoughts? No.  The contracts are wahat the contracts are.  The numbers, sometimes, you have to deal with what is relevant.  He was in a situation with the franchise tag where he was going to make $14.6 million this year."

On making predictions for this season:

"You've been around the game long enough to know you can never predict those things.  Here's what we're focused on this year: We need to improve the wins.  Wins are what you get measured by.

"Along in the process, though, we have to build this foundation. When you're building a foundation, we're not going to use that as an excuse for there to be an acceptance of not winning games. We're going to fight every week to win games.

"Until we find people to help us win games, we're going to do it.  There's things you can control but there's so many thing you can't control, whether it be injuries to your team or others teams.  So, I'll leave the predictions up to you."