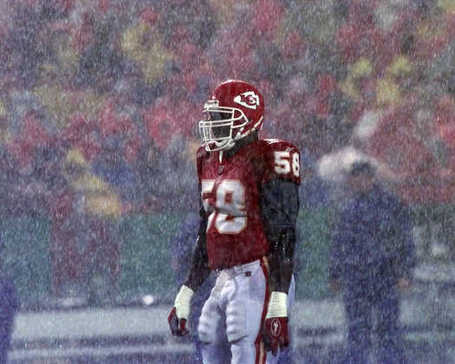 To help you get fired up for the ceremonies...via ChiefsPR:

Fans just hollered "home of the Chiefs" at the end of the Anthem. DT would have loved it.

Recently, I was given the opportunity to ask Edith Morgan, mother of Hall of Famer Derrick Thomas, a few questions about her son and the foundation she's created.

Check out Moms2Moms58 - a non-profit focusing on child safety and empowerment.  They've got some DT memories at the website as well.

I asked Mrs. Morgan about the foundation, how Kansas City has embraced her and DT's legacy and what it's like for Carl Peterson to be the one presenting him.

Take a few minutes to read this while we countdown the minutes until Kansas City officially has a new Hall of Famer.

On having former Chiefs GM Carl Peterson present Derrick to the Hall:

"My family and I are so pleased to have Carl as the person to present Derrick to the Hall. As many may know, Derrick’s father was a Captain in the US Air Force and we lost him while he was serving the country in Vietnam. Though very young, the loss of his father was very traumatic and had a lasting affect on him.

"Mr. Peterson was such a positive influence and really had a personal hand in shaping Derrick’s future, and shaping him into a Hall of Fame caliber player. It is people like Carl, who stood by us during our darkest hour of Derrick’s death, and who has remained by our family’s side that makes Derrick’s induction all the more special.

"We are so lucky to have him do the honors."

Moms 2 Moms 58 was founded with the primary goal of helping to inform mothers on children's safety issues, especially vehicle safety. As a mother who has suffered the terrible loss of a child due to an automobile accident I felt that other mothers would be able to more easily relate to my story and hear my message on the importance of vehicle safety for our children and us.

We constantly found parents who had no idea their child's' car seat was not properly installed, or that there are guidelines for when a child should and should not sit in the front seat of the car. We have focused on nationwide demonstrations for properly installing child car seats, speaking on the importance of wearing a seatbelt and safe driving skills for teens.

We have been so blessed to have the support of Derrick's former teammates and fellow players in giving their time to help spread the word on car safety. My goal for the next several years is to expand into what I call family strengthening areas. By that I mean, taking the same tools of our car safety efforts and working with families to tackle areas that can weaken the family structure. 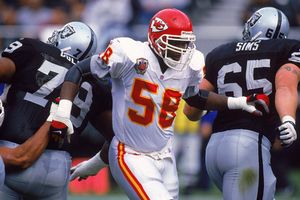 Areas like fighting childhood obesity and improving health practices (regular doctor's visits, early cancer screenings and disease prevention rather than intervention) for the family overall. Illness can be an emotional and financial strain on the family unit and can be attributed in great numbers to its breakup.

Some of the biggest hurdles of these problems can be lessened simply by getting children active, into supportive environments such as community centers and hearing the message that a healthy parent will more than likely mean a healthy child.

The foundation has a unique team of people with the technical knowledge in these areas, high-profile visibility to spread the word and, above all, the dedication to execute this vision. We are working diligently to put the resources in place and the public will be hearing more about our efforts in the coming months.

In the last ten years, how have Kansas Citians embraced not only Derrick's legacy, but you and your foundation?

Oh, it is almost impossible to relay the amount of love and support we have received since Derrick’s death.

Recently, on the foundation’s website and our Twitter page we asked people to tell us their favorite #58 moment on or off the field. We received everything from funny stories of Derrick singing in celebration to people who made paintings and even tattooed his number on their arm!  It feels great to see people’s eyes light up when they talk about him. It can really bring you to tears. 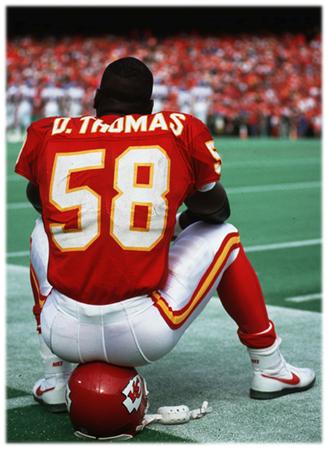 I constantly receive well wishes from fans in Kansas City asking how I am doing, cheering on my grandsons’ college careers and just letting us know his fans still care. People remember how much Derrick loved to organize events and bring people out to support causes.

His fans’ support has transferred over to Moms 2 Moms 58. When we started letting people know of the restart of the foundation we immediately received messages and calls from fans wanting to know how they could help. I owe a great amount of appreciation to Kansas Citians for how much they still love and remember him.

It is also a great comfort for his children to see how much people admire their father for the man he was on and off the field. Derrick’s family and the Moms 2 Moms 58 team would like all of Derrick’s fans, Chiefs’ fans and everyone who supported the effort to elect Derrick into the Pro Football Hall of Fame know how much they are appreciated and how thankful we are for their efforts. Just like they will never forget him, we will never forget all of their love and support.

There are so many people to thank, like Lee Seinberg and the Kansas City Chiefs organization, who also share in this special moment. We hope everyone will celebrate Derrick’s Hall of Fame enshrinement knowing they played a special part.