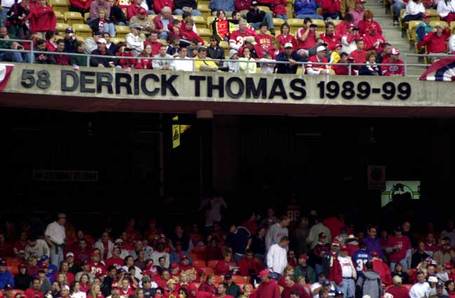 We continue collecting memories and thoughts of Derrick Thomas as he is now just hours from being posthumously inducted in the Pro Football Hall of Fame.

I still haven't gotten over how nice it is to write DT and HOF in the same sentence and have it mean something.

Up next is Ryan from KC Chiefs Blog.  Ryan was nice enough to give me his thoughts on today.  Please thank Ryan, digitally that is, by checking out his DT roundup.

Not the way Carl Peterson, Clark Hunt and the rest of the Chiefs family miss him.  And certainly not the way his friends, children, siblings and mother miss him.

This weekend we are going to hear so many incredible stories about Derrick Thomas’ life and career from those that knew him best.

There won’t be a dry eye in the place.

But Derrick and I had a much simpler relationship.  He knew me as one of millions of fans and I knew him as the greatest linebacker to ever play the game.  Like I said…  Simple.

Every single day I miss having Derrick Thomas on the Kansas City Chiefs.  Not because of the stats, awards or any of the other accolades.  But because I miss having the best player on the field every Sunday.

I still remember sitting in front of the TV watching the Chiefs and knowing – not hoping – that Thomas was going to have an impact on the game.  No matter who he was staring down on the other side of the line, there was no single player better week in and week out than Derrick Thomas.  It’s something the Chiefs have been without ever since that day in February when he left us all for good.

If he were still with us today, I have no doubt in my mind that Derrick Thomas would be spending his Sundays up in the booth with Mitch Holthus and the only Chief he wasn’t better than, Len Dawson.  And as sad as it is that we were never able to experience the guaranteed chemistry that trio of personalities would have generated, I will always keep with me the feeling he gave me every Sunday when I knew my team had the best player on the field.

In the meantime, I will continue spending my Sundays the same way I have every week since 2000: waiting for the next Derrick Thomas.

Something tells me that day is never going to come.