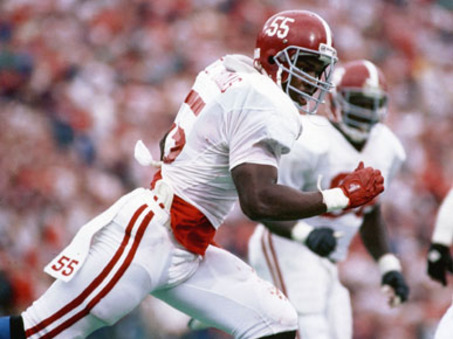 "I don’t ever want it to be a question whether I’m a Pro Bowl-caliber player.  I believe I’m the best at what I do, and it’s my responsibility to play like I’m capable of playing and help this defense as much as possible."   -Derrick Thomas

For now, I've gathered a few quotes from his professional coaches, Marty Schottenheimer and Gunther Cunningham, along with his college coaches, Ray Perkins and Bill Curry.  These various quotes come from the Birmingham News and the Sporting News.

"You didn't have to look at Derrick very long in practice to figure out he was going to be a player.  Over my coaching career, he was one of the few guys who gave it every single thing he had every single play, from snap to whistle. That's pretty rare."

"I think he has to be one of the best pass rushers to go down in (the history of) the game," said Perkins, who also coached Taylor with the Giants. "You don't put one guy on him. If you put one guy on Derrick Thomas, you probably just lost the ballgame."

"I know I put my seat belt on now.  I can't say it's because of Derrick. But I can say I'm very aware he didn't have his on. So I put mine on, where for years and years and years I never touched one."

"He was the best football player I ever coached.  He could just dominate a game."

"Let me tell you how good he is," Curry told Schottenheimer. "You will put him on the field on day one, and he will be your best player. And he will be the best player that you have on the Kansas City Chiefs every day."

"You're watching him and, all of a sudden, this big, broad smile breaks out.  Derrick would have this grin come across his face. He looked like the cat that ate the canary."

"He was late for a meeting the night before.  I told him he wasn’t starting, and he was really upset. It was national TV, and NFL players love national TV. He stood on the sideline with us the whole first quarter. He was like a caged animal."

"His job was to get the quarterback.  People would talk about his run-stopping ability. Let me tell you something, stopping the run isn’t about one guy. A defense that can’t stop the run is never about one guy."

"He was like a running back rushing the passer, but he also had enough power to overpower you.  That combination is hard to find."

"That relationship was personal and it was deep. He was that way with my family. When he passed away, for two years I broke down every time I thought about it, about how unfair it was."

"Sometimes during the season, it would be very, very late, and I'd be in my office and the phone would ring," Cunningham said. "It would be Derrick. He'd say, `Gun, go home and get some sleep. Don't worry. We'll win."'