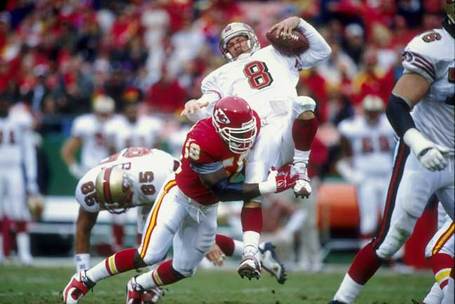 We continue to remember Derrick Thomas today with Adam over at Arrowhead Addict.  I asked him to give us a few of his thoughts on Derrick, today's enshrinement and how he's remembering DT.

He's one of the biggest DT fans out there.  He and the rest of the folks at AA voted him the COAT (Chief Of All Time).  Derrick is the reason so many of us are Chiefs fans and that continues with Adam.

Adam is actually in Canton as we speak so definitely check out at AA.

We thank Adam for giving us his thoughts on this momentous occasion.

When it was first announced that Derrick Thomas had indeed made the NFL Hall of Fame class of 2009, my immediate reaction one of my heroes finally getting his football due was the following:

I’m not going to write about the stats. Anybody can do that and everybody will. Derrick Thomas was my hero — I owe him more than that. Besides, his stats only tell half the story. Roughly a year ago, all of us Addicts voted him the COAT (Chief of All Time). There’s a reason for that.

You know that essential team identity thing I always write and talk about? D.T. gave the Chiefs team of the 90s that. He was what Larry Fitzgerald is to the Cardinals. What Ray Lewis is to the Ravens. He filled opponents’ hearts with fear and the hearts of Chiefs fans’ with fire. Like Lawrence Taylor, D.T. caused opposing offenses to dramatically alter their gameplans. The way he fired up the crowd altered offensive gameplans as well.

Arrowhead is the loudest stadium in the NFL, but it was at its loudest when Derrick was rocking the place. I’ve never seen a football player capable of hyping up the crowd the way he did.

Sure, he had the uncanny ability to take over games late with his pass-rushing ability. It wasn’t just the way he took over games, though. D.T. communicated to the Arrowhead crowd with his body. He was in sync with us, and we were in sync with him. Derrick talked to us, and when he did it was sweeter than the sweetest lullaby our mothers ever sung to us.

Do I think I overstated things due to an emotional reaction now that I have some distance from the announcement? No. Not at all. Derrick Thomas was quite possibly the most special man ever to don a Chiefs uniform. His smile could take over a room instantly. His pass-rushing ability could take over a game instantly. He was very much the man in only a way I think Len Dawson and maybe Tony Gonzalez (and George Brett, if we include baseball) have been the man in Kansas City.

I'm going to see D.T. get posthumously inducted into the Hall of Fame in Canton this weekend. It's a dream come true for me. My old man, the Old Chief, promised my brother and I a trip for the boys up to see his induction ceremony after he died. The committee finally wizened up and gave him the green light, so we're finally going. The old man kept his word.

Now, I think we all just want to keep Derrick with us. His memory is sure to inspire us, and I will do my best to make sure we pass along the first-hand experience of seeing our hero finally make the hall. All I know is that day will be a special day for not only me and my family, but all Chiefs fans. I know for a fact that my family wasn't the only one he touched, wasn't the only one he influenced. Quarterbacks weren't the only thing Derrick got to with regularity. He got to our hearts, too.