Share All sharing options for: Bob Gretz on Derrick Thomas 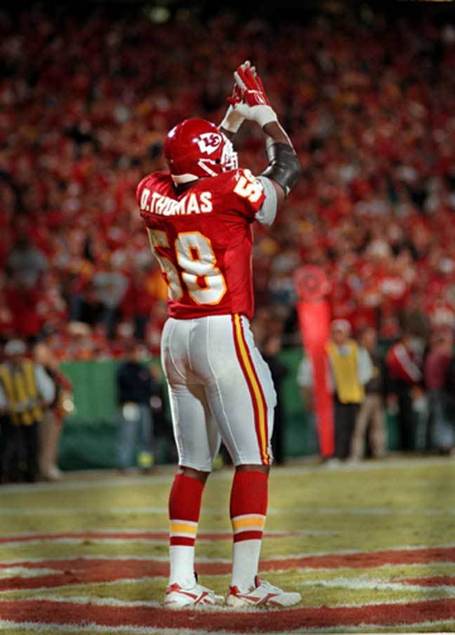 Bob Gretz is one of the few people I really wanted to hear from about Derrick Thomas because Bob has seen it all in nearly thirty years of covering the Kansas City Chiefs. Like he goes on to say, he saw every single one of Derrick Thomas' NFL games. Many thanks to Bob for taking time out from writing at BobGretz.com to contribute here.

Bob talks about Derrick Thomas, after the jump.

But there was so much more to Derrick than that and there are so many moments off the field were D.T. also left memories. One came in the 1992 off-season.

At the time, I was doing a morning radio show on KCFX with comedian/author/bon vivant David Naster. We booked an author for an in-studio appearance. Her name was Jean Hill and she had been the subject of a book JFK: The Last Dissenting Witness. She and the book’s author were scheduled to be in studio one morning.

Jean Hill had been in Dealey Plaza in Dallas on November 22, 1963. She was just 21 feet away from President John Kennedy when he was shot. Hill is visible in the Zapruder film as the woman wearing a red rain coat. She said emphatically from the start that the shots at JFK came from the area that has become known as the "grassy knoll" not from the upper floors of the Texas Schoolbook Depository Building.

In the years after the assassination, Hill faded from public view. Many others in the Plaza that day died under unusual circumstances and her comments were in direct contradiction to the conclusions issued by the Warren Commission. She said she did not want the attention and feared for her life.

Eventually, she was convinced to tell her story. She also became one of the major sources of information for director Oliver Stone in the making of his movie JFK.

When it came to the JFK and his death, few people were more informed, were more studied on the matter than Derrick Thomas. He had every book written about the subject and there have been hundreds. He had every documentary done on that day, and there have been dozens. He had visited Dealey Plaza. He had talked to others who were part of that day, both before and after the shooting. When it came to all the theories on what happened, he could discuss them all, poke holes in them, or provide supportive information.

D.T. was perfect to have with us that morning to talk with Jean Hill. I approached him one day during the off-season at Arrowhead and told him that she was going to be our guest and that I wanted him to be there. His eyes lit up and he said absolutely, what time? When I told him 7:30 a.m., the smile left his face.

Understand that D.T. was not a morning person. Actually he hated mornings. He was also perpetually late. I walked away and figured there was no way he would show up on time and little chance that he would show up at all.

The appointed morning came. A few minutes before the appointed moment, our phone rang in the studio from the security desk downstairs. It was D.T.

He showed up in the studio wearing a suit and the look of a man who had not yet been to bed. Turns out he had not slept. No, he had not been partying. He had been working.

At the time, D.T. had bought a limousine and set up a limo service. The night before he had a reservation for the car, but at the last minute his driver had to back out of the assignment. So being the owner, D.T. became the driver. He threw on a suit, grabbed the keys and took care of the fare. It was a bachelor party that started in Kansas City, made its way to Lawrence and Topeka and then back to Kansas City. He dropped off his last passenger and came right to the studios.

Jean Hill showed up a few minutes later and before any of us knew it, she and Derrick were conversing on the air about the assassination. Hill was amazed at D.T.’s depth of knowledge and he reveled in the opportunity to pick the brain of someone who had been on the spot.

To this day, I’m not sure how it sounded on the air, if it was entertaining, or made sense. But I was fascinated. Just watching a young man like Thomas talking with a woman who was a senior citizen about one of the biggest news events of the century was surreal.

Like so many moments involving Derrick Thomas, I can’t help but smile at the memory.

Many thanks to Bob Gretz for taking time to contribute this. Make sure you check out BobGretz.com for the some of the best Kansas City Chiefs football coverage around.