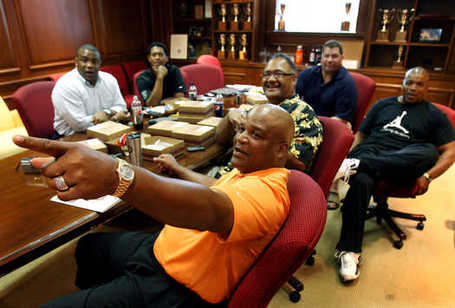 In a video done by the Kansas City Star, a handful of former Chiefs players got together and talked about Derrick Thomas, his time on the field and that constant smile everyone seems to talk about.

Below, I've taken some notes on what each of the six former Chiefs player said about Derrick Thomas.

"There were several times, he just got very angry. He'd just get that rage about him. You knew we were in some big game, like come playoff time or against the Raiders in the AFC wildcard game when they came to Kansas City, and you'd see him....it was a fun way to see him because you always saw the big jovial smile."

"During the course of any opposing game, the opposing offense had to account for Derrick Thomas."

"Derrick had the ability and he used it to the fullest.  It was a shame that he left us so soon."

"When you think of linebackers and Derrick Thomas and you think of the Kansas City Chiefs and the history behind it and I think that's what he's going to leave for us.

"Other linebackers have to measure up to Derrick Thomas."

"If you were to see Derrick, and talk to Derrick today, [he would say] 'It's all about team.'  The one thing you'll find out about Derrick is that the way he played is the way he worked even during the offseason, even during practice. Everything he did, he did full go."

"I remember him having that smile all the time.  Even before the game when everybody's always all intense, especially defensive guys real intense and real focused, and he'd always be laughing and kinda joking around. I remember thinking to myself, 'How can he be ready to play all the time?' because he never seemed like he was intense or mad or angry. He just went out and played.

"In practice and training camp, we'd be dead tired. He'd always be running around and happy.  They'd go play golf in between practices."